Roscosmos plans to launch a ship to the International Space Station in 2020. The flight taking will be ultra-fast taking only two hours, Roscosmos executives said at a press conference at the Vostochny Cosmodrome

Astronauts having a roast on their menu is getting closer, after a successful experiment. A 3D printer creates meat aboard the International Space Station (ISS). The bioprinter produces beef, rabbit and fish tissue using magnetic fields in microgravity, said the Russian medical technology company involved in the experiment.

The documents were signed after a meeting of Serbian and Russian delegations headed by Presidents Aleksandar Vucic and Vladimir Putin, during the Russian leader's visit to Serbia on January 17.

Rosatom CEO Aleksei Likhachev and Serbian Minister for Innovations Nenad Popovic initialed an agreement on peaceful use of nuclear energy. 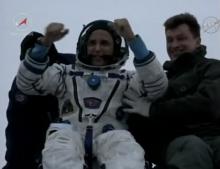 A space capsule with two Americans and a Russian landed successfully this morning in Kazakhstan.

The three cosmonauts have returned to Earth from the International Space Station. The landing of the capsule was broadcast directly on NASA's television.

Russia and the United States have agreed to cooperate on a NASA-led programme to build the first lunar space station, part of a long-term project to send humans to Mars.

The US space agency said earlier this year that it was exploring a programme called the Deep Space Gateway, a multi-stage project to push further into the solar system.

The European Space Agency (Esa) is getting ready to put a probe on Mars.
Its Schiaparelli robot will attempt the risky descent to the surface in the coming hours, after a 500 million km journey from Earth.
The touchdown is regarded as a dress rehearsal for a much more important venture in four years’ time when Esa will bid to place a very expensive rover on the planet.

Two robotic spacecraft on March 14 began a seven-month journey to Mars as part of a European-Russian unmanned space mission to sniff out leads to life on the Red Planet. 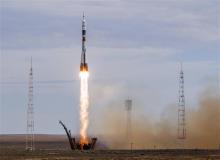 Astronauts from Russia, Japan and the United States July 23 docked successfully with the International Space Station under six hours after they launched, NASA television showed.

According to Roscosmos, the stricken spacecraft was expected to burn up on re-entry in the Earth's atmosphere with just a few small pieces likely to survive the heat to hit planet's surface.