The world's leading contemporary art fair has taken a futuristic turn this year, offering buyers the chance to see their sculptures placed on the moon.

Non-fungible tokens, or NFTs, were all the rage at the Art Basel fair in Switzerland, where the world of digital assets is taking off.

Two small NASA satellites that were meant to study hurricane development failed to enter orbit on June 12 when their Astra rocket shut off before reaching the necessary altitude, the US space agency said.

Türksat 5B telecommunication satellite will be put in service next week on June 14, Transport and Infrastructure Minister Adil Karaismailoğlu has announced.

"After a five-month journey, Türksat 5B reached orbit on May 17. Performance and orbit tests were conducted successfully. Now it is time to put the satellite in service," Karaismailoğlu said. 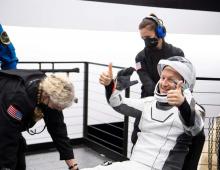 NASA's Crew-3 mission returned home to Earth on May 6 after six months aboard the International Space Station (ISS). 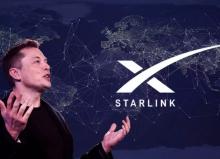 Billionaire Elon Musk announced late last night that his company SpaceX's Starlink satellite broadband service is available in Ukraine, with SpaceX sending more terminals to the country whose Internet has been disrupted by the Russian invasion, Reuters reported.

"The Starlink service is already active in Ukraine. More terminals are on the way," Musk wrote on Twitter.

Astronomy experts say they originally misread the secrets of the night sky last month: It turns out that a rocket expected to crash into the Moon in early March was built by China, not SpaceX.

A rocket will indeed strike the lunar surface on March 4, but contrary to what had been announced, it was built not by Elon Musk's company, but by Beijing, experts now say.

SpaceX's newest fleet of satellites is tumbling out of orbit after being struck by a solar storm.

Up to 40 of the 49 small satellites launched last week have either reentered the atmosphere and burned up, or are on the verge of doing so, the company said in an online update Tuesday night.

NASA has said it aims to survey the crater formed when the remains of a SpaceX rocket are expected to crash into the Moon in early March, calling the event "an exciting research opportunity."

The story of Grizu-263A, Turkey's first mini-satellite that was sent into space recently, has been made into a documentary film.

The film tells the story of the production process of the mini satellite, which was launched with the SpaceX Falcon 9 rocket from Cape Canaveral Space Base in the U.S. on Jan. 13.