Kavala Mayor Dimitra Tsanaka has come under fire after stopping the unveiling of a memorial to the city?s 1,484 Jews that were killed by Nazi troops, because it featured the Star of David.

BELGRADE - The 3rd Belgrade Irish Festival, which will until March 22 feature works by Irish film, theatre, music and literary authors, has opened in the new building of the Yugoslav Film Archive.

BELGRADE - The Belgrade Irish Festival (BIF) under the slogan 'BEO-GRAD, ZELENI-GRAD' will be held at several locations in Belgrade from March 13 to 22.

The star of this year's festival, the third in a row, is Irish singer and composer Lisa Hannigan who will perform in the Belgrade Youth Centre on March 21.

BELGRADE -- The Belgrade Irish Festival (BIF) will be held at several locations from March 13 until March 22, the event's organizers have announced. 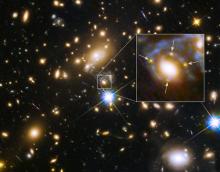 Astronomers observed four versions of a supernova thanks to the gravity of a cluster of galaxies, which magnified and bent the exploding star's light to create multiple images, scientists said March 5.

Greece will be represented at the 60th Annual Eurovision Contest in Vienna on May 19 by Maria-Elena Kyriakou. The beautiful singer, last year's winner of The Voice hit talent show, will represent Greece with the throaty ballad, "One Last Breath" after the audience and Greek contest committee voted on Wednesday.  The first semifinal takes place on May 19, followed by the second final on May 21.

The eccentric singer accepted the proposal and she will be shown during the 5th season. Gaga could not, however, not cause a media stir. The star will be appearing topless in a scene and, already, the picture is making the usual Internet rounds.

Dolce & Gabbana presented their new line at “home court”, during the Milan Fashion Week, and once more managed to excite the fashion world.

The house were innovators, once more, dedicating their show to mothers and motherhood, resulting in some models holding children in their hands while on the catwalk.

Over 200 untouched photos featuring Beyonce from her campaign with L'Oreal in 2013 were leaked to "The Beyonce World", a site for fans of the famous singer. The 33-year-old super star, who looked stunning in the shoot, was less than flawless in the original photographs.