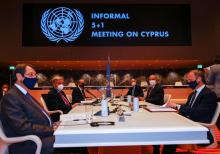 Turkey and Turkish Cyprus have blamed Greek Cyprus for failing to introduce a new vision for ending the stalemate on the island as a result of a two-day-long U.N.-led conference in Geneva, underlining they will continue to work for a two-state solution.

Turkey will not negotiate anything but the two-state formula for resolving the decades-old deadlock in Cyprus, President Recep Tayyip Erdoğan has said, slamming both Greece and Greek Cyprus for their continued ignorance of the presence and rights of the Turkish Cypriot community on the island. 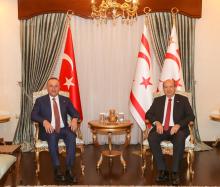 Turkey and the Turkish Cypriots will pursue a two-state solution on Cyprus and will seek if there is an opportunity in this bid during a new initiative by U.N. Secretary-General Antonio Guterres, Foreign Minister Mevlüt Çavuşoğlu has said.

Turkey and Turkish Cyprus will seek to coordinate their positions concerning the future steps to be taken for resolving the Cyprus problem before 5+1 format talks as Ankara urged the United Nations to stop relying on "a tested and exhausted process" that has failed to resolve the Cyprus dispute for "more than 50 years."

Turkey and the Turkish Republic of Northern Cyprus on June 7 condemned the hanging of a Byzantine flag over a mosque in Greek Cyprus.

Three Molotov cocktails were thrown at the Köprülü Hacı İbrahim Ağa Mosque in Limassol province of Greek Cyprus on June 1.

Molotov cocktails thrown at the entrance of the mosque were noticed early and put out.

The bodies of 18 Turkish Cypriots who are due to be sent back to their homeland are still being held in a London mosque weeks after their deaths.
Turkish Cypriots in the United Kingdom, one of the communities most affected by the COVID-19 outbreak, are holding the bodies in a Hackney mosque in east London to fulfill the will of their relatives who lost their lives.

A forest fire broke out in Turkish Cyprus' northwestern town of Tepebaşı, as heat waves continued to grip the island.
The fire occurred in forestland in the area, and Turkish Cypriot leader Mustafa Akıncı said the fire was partially under control, but it would create massive environmental damage.
Akıncı noted it was too soon to say what the cause was.

Senior Turkish officials on Feb. 8 condemned the remarks by Mustafa Akıncı, the leader of Turkish Cyprus in a British daily.

The condemnations came after Akıncı talked to The Guardian about the long-standing reunification efforts in Cyprus island.

The presidency is an important position for overcoming the "frozen uncertainty" in Cyprus and "the deadlocked problem can be solved with more creative and new ideas," according to a top Turkish Cypriot politician.