Several thousand people protested under the slogan "Stop torture at the border".
The protesters accused the Polish authorities of cruel behavior due to pushing migrants back and the introduction of a state of emergency at the border, which prevents human rights activists and humanitarian organizations from helping migrants. 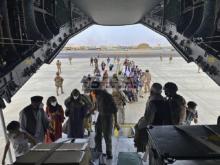 The UN refugee agency is gearing up for as many as half a million people or more to flee from Afghanistan in a "worst-case scenario" in the coming months, AP reports.

UNHCR says the situation in Afghanistan following the Taliban takeover last week "remains uncertain and may evolve rapidly," with up to 515,000 new refugees fleeing.

The alert level for Afghanistan has been reassessed and raised and Romanian citizens are urged to urgently leave this state's territory and to avoid any travel to Afghanistan, the Ministry of Foreign Affairs (MAE) informs on Friday in a press release sent to AGERPRES.

A Belarusian Olympic athlete who claimed her team was forcing her to return home spent the night under protection and may be seeking asylum, officials said on Aug. 2.

Sprinter Kristina Timanovskaya, 24, missed her chance of competing in Tokyo when the 200 meters heats went ahead without her in the Olympic Stadium.

Ramic spoke English and he became one of several young people who managed to feed their families by working as interpreters for UNPROFOR or other international organisations such as the UN refugee agency, UNHCR.

But while working as an interpreter, he had to witness some traumatic incidents, such as an artillery attack on the village of Konjevic Polje.

A new report by a Serbian human rights lawyer published on Wednesday said that the country only accepted 27 per cent of 223 applications for asylum last year, fewer than in 2019.

"The first conclusion that can be drawn from these figures is that the number of total decisions has dropped by 28 per cent in comparison to 2019 and was the lowest in the past four years," the report said.

With a brutal crackdown on peaceful protests, Syrian President Bashar al-Assad's government lighted the fuse to which has now become a decade-old conflict, leaving hundreds of thousands of people dead and millions displaced.

Russian opposition leader Alexei Navalny is among the nominees for Nobel Peace Prize 2020. Apart from him, the World Health Organization and Swedish conservationist Greta Thunberg will also vie for the prize.

The three were nominated by Norwegian lawmakers. Thunberg is listed as one of the prominent activists in the fight against climate change.

Alarmed at the increasing frequency of expulsions and pushbacks of refugees and asylum-seekers on Europe's land and sea borders, the UN Refugee Agency, UNHCR, on Thursday called on European states to investigate and halt these practices.

The UN Refugee Agency on Thursday called on states to halt and investigate the forced deportations - known as pushbacks - of migrants attempting to reach Europe that have been recorded by non-governmental organizations.