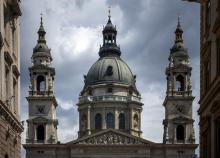 One historic event that reflects how much, and perhaps also how little, the world has changed in the last century, is the peace treaty signed in the Grand Trianon Palace in Versailles on June 4, 1920.

The renowned Vienna State Opera will re-open its doors from June 8 -- with 100 guests per show in line with anti-coronavirus government guidelines, the opera house announced on June 3.

A total of 14 concerts will be held this month for up to 100 spectators each. All will be streamed live free of charge, the 1,709-seat opera house said.

Turkish Airlines, which resumed its domestic flights this week, has taken additional measures in flights against the coronavirus.
Depending on the flight distance, the carrier is distributing hygiene kits, which contain face masks, disinfectants and antiseptic wipes, to passengers on its planes.

The exhibition "Trianon 100. Romania at the Paris Peace Conference", a complex project comprising hundreds of vintage documents and photographs, will be available online starting on Thursday at www.mnir.ro and www. mvu.ro, at the "Trianon 100" section, the National Museum of History said in a release.

Ukraine's human rights ombudswoman has appealed to authorities to find a solution for scores of infants born to surrogate mothers for foreign parents who are stranded because the country's borders are closed under coronavirus restrictions.

Turkish Airlines (THY) is set to resume flights between 16 cities in six European countries, including Germany, the Netherlands and Austria and Turkey, on June 18, the flag carrier's senior official has announced.

The World Jewish Congress, an international organisation representing Jewish communities, praised on Monday the Austrian parliament's adoption of a proposed ban on the annual commemoration of the killings of Croatian Nazi-allied troops and civilians at Bleiburg in Austria by the Yugoslav Partisans at the end of World War II.

The Republika Srpska entity parliament adopted a statement on Monday saying that it rejects the Resolution on Respect for the Victims of the Fascist Regime and Movement that was adopted by Bosnia and Herzegovina's state-level parliament last month because it allegedly rewrites history and marginalises Serb suffering in World War II.