The Azerbaijani state oil company, SOCAR, has agreed to import additional amounts of natural gas to Turkey amid a cut in the flow from Iran, a senior official of the company has said.

Ankara and Moscow are working to determine the date for a visit by Russian President Vladimir Putin to Turkey where discussions will also focus on tensions in eastern Ukraine, Foreign Minister Mevlüt Cavuşoğlu said on Jan. 27, pointing out the aftermath of the Russian leader's participation in the Beijing Olympics.

Natural gas in Europe rose by about 8% to 86 euros per megawatt-hour due to growing fears of a possible Russian military invasion of Ukraine, which would further escalate tensions between the West and Moscow and lead to problems with Russian supplies of natural gas to the old continent in the case of possible introduction of stricter sanctions. 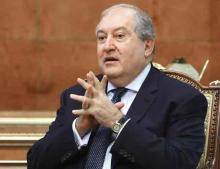 Armenian President Armen Sarkisian has that he was resigning his largely ceremonial position, citing the inability of his office to influence policy during times of national crisis.

The announcement comes on the back of a period instability in the small and economically struggling ex-Soviet Caucasus nation in the wake of a war with its long-standing rival Azerbaijan.

The Turkish and Iranian presidents, Recep Tayyip Erdoğan and Ebrahim Raisi respectively, have discussed ways to improve bilateral relations ahead of an upcoming high-level cooperation council meeting in Tehran as well as regional developments in the Caucasus.

Turkey's Petroleum Pipeline Corporation (Botaş) has lowered natural gas flow to large industrial sites and power stations by 40 percent because of a disruption in pipeline gas imports from Iran.

The national pipeline company has taken all neceassary measures for households not be affected by the shortage, a statement released in the evening on Jan. 20 said.

Nachtmanova may have met relatively late with Saz in the Berlin suburbs populated by many Turks and Kurds from Turkey, but in a short time has become popular for her enthusiasm for Turkish bardic culture and Saz - and of course for her crystalline voice.

Turkey has donated 200,000 doses of COVID-19 vaccines to Burkina Faso and Togo, two Western African countries where the effects of the pandemic have had more troubling consequences than the rest of the world, in a campaign by the Organization of Turkic States.