Expecting a total amount of nearly $7.5 billion in sales to foreigners this year, the Turkish property market ranks among the top 10 in the world, according to an executive of a sectoral association. 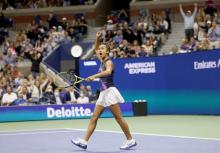 This is the first time in history that someone from the qualifications came to the finals and Emma Raducanu did it!
Currently the 73rd tennis player in the world, 19-year-old Leylah Fernandez from Canada, defeated Aryna Sabalenka after a great fight - 7: 6 (3), 4: 6, 6: 4.
Battle with World No. 2 lasted two hours and 24 minutes.

When Plamen Radomirsky, 68, had his first COVID vaccine dose in Canada early this year he was shocked to be told he'd have to wait two months for the second one. Keen to make sure he was 100% protected, he got on a plane for his native Bulgaria.

After ten minutes of queuing at a vaccination centre in Sofia, Radomirsky said, he had received his second dose.

A report recommending an end to the Customs Union between the European Union and Turkey and replacing it with a free trade agreement (FTA) of the type with the United Kingdom, Japan or Canada has been discussed at the European Parliament's Commission on International Trade (INTA).

Romanian - German pair Horia Tecau/Kevin Krawietz qualified for the second round of the US Open men's doubles, the last Grand Slam of the year, after having defeated Marton Fucsovics (Hungary)/Stefano Travaglia (Italy), 6-3, 6-2, in New York on Thursday. The sixth seeded couple, Tecau and Krawietz, played an exact game, without major errors, winning in just 51 minutes.

Anime is now one of the most popular kinds of entertainment. For the record, 3.5% of the world's population regularly watch anime. There are many topics covered in them, and a gambling theme is also present in this series.

Turkey's first corn maze, established in the Şile district of Istanbul within the scope of a tourism innovation project supported by the Agriculture Ministry and the Union of Agricultural Chambers and the Association of Travel Agencies (TÜRSAB), has been opened to public visit.

According to the AP, the small Arab state is being asked to help shape what lies ahead for Afghanistan because of its ties with both Washington and the Taliban.

A large international oceanographic mission to conduct underwater research drilling around the Santorini-Columbus-Christian volcanic complex in the South Aegean has just been approved and will take place from December 2022 to February 2023.