Taiwan announced today that it has registered the first case of a new coronavirus, according to BGNES.

The disease was diagnosed in a 55-year-old Taiwanese woman who returned from the Chinese city of Wuhan yesterday, where the disease was first detected in December.

An official ceremony to launch the Sino-Hellenic Investors' Confederation, a new confederation aimed at facilitating Chinese investors in Greece and supporting the further enhancement of bilateral friendship and cooperation, was held in Athens on Saturday.

The death toll from a mysterious flu-like virus in China climbed to six on Jan. 21 as new cases surged beyond 300 and authorities fretted about the added risk from millions of Chinese travelling for the Lunar New Year holiday.

Round the world, airports tightened screening of travellers from China as officials confirmed the coronavirus strain is contagious between humans.

With millions of Asians traveling on Jan. 21 for the Lunar New Year holiday, authorities in China confirmed that a new virus could be spread through human contact, reporting 15 medical staff had been infected and a fourth person had died.

At that meeting on Wednesday, the World Health Organization said, their International Health Regulations Emergency Committee will determine whether the outbreak constitutes a public health emergency of international concern.

Australia has confirmed the first case of infection from the new coronavirus that been reported in China, Japan and South Korea.

A Queensland Health spokesperson said the man was being tested because he had visited Wuhan.

"The man will remain in isolation until his symptoms have resolved. We are closely monitoring the coronavirus outbreak in China.

The International Monetary Fund (IMF) has downgraded its growth forecasts for 2019-2021, primarily reflecting negative surprises to economic activity in a few emerging markets.

Foreign Affairs Minister Bogdan Aurescu, stressed, at the meeting of the Foreign Affairs Council held in Brussels, the importance of the consistent and swifter implementation of the Mali Peace Agreement. 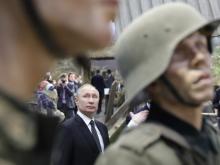 Moscow is once again the center of world politics, German Handelsblatt correspondent Matthias Brugman writes.
Russian President is a geopolitical winner, thanks to his choice to take risks. He has secured power in the country and has also strengthened himself on the world stage in foreign policy, Brugman claims.