The shutdowns of malls and restaurants first in March and then in end-November has seriously impacted the trade and hospitality industry but at the same time offered the companies new opportunities for rechanneling greater part of their business to online services.

World leaders on Wednesday expressed their shock as supporters of U.S. President Donald Trump stormed here the U.S. Capitol building where Congress meets in an attempt to overturn the results of the Nov. 3 election won by Joe Biden.

U.N. Secretary-General Antonio Guterres was "saddened" by the events at the U.S. Capitol, his spokesman said.

Romanian alpine ski racer Ania Caill managed to finish on the podium in both super giant slalom events held on Wednesday in Flaine (France) under the auspices of the International Ski Federation.

Proliferation of the highly contagious novel coronavirus strain, first detected in Britain, has now been confirmed in 41 countries and territories, the World Health Organization said in its COVID-19 Weekly Epidemiological Update on Tuesday evening.

Germany, France and Great Britain fought fiercely for the nuclear treaty with Iran, which was signed five years ago. Since the end of 2018, since Trump left the Treaty on the Prohibition of Nuclear Weapons (TPNW), or the Nuclear Weapon Ban Treaty, its stability has been in question, reports Deutsche Welle.

"Three or four difficult months are in store for the Bulgarian economy. Our major trading partners - Britain, Germany, France - are introducing severe ant-epidemic measures and this will affect all sectors of our economy. The difficulties of vaccination are mounting. Investments in Bulgaria last year shrank by 60%.

The Mechanism for International Criminal Tribunals in The Hague turned down Milomir Stakic's request to be freed early, ruling he has not yet served the required two-thirds of his 40-year sentence for persecution, extermination and murder.

The principle, according to which the reforms pave the way to EU membership is no longer in force for the countries of the Western Balkans, writes the Frankfurter Allgemeine Zeitung newspaper in an extensive analysis cited by Deutsche Welle and BTA. 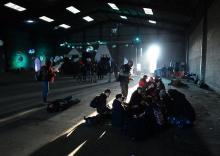 Some 2,500 partygoers attended an illegal New Year rave in northwestern France, violently clashing with police who failed to stop it and sparking concern the underground event could spread the coronavirus, authorities said on Jan. 1.