Many countries have already made decisions on the temporary suspension of air traffic with the United Kingdom.
Of particular concern was the warning by British Health Minister Matt Hancock that "a new strain of the virus is out of control".

The UK plunged into Christmas chaos with police deployed to stop people boarding packed trains, holidays abroad scrapped and Europe banning travel with the country after London went into an emergency lockdown.

Britain's government said on Dec. 20 it would hold a crisis meeting after countries worldwide banned arrivals from the U.K. over a new highly infectious coronavirus strain it said was "out of control", as the WHO called for stronger containment measures.

Turkey late on Dec. 20 joined other European countries in banning flights from the U.K. and other countries due to concerns over a new fast-moving coronavirus strain.

"It has been reported that the rate of transmission has increased in the U.K. with the mutation of the coronavirus," Turkish Health Minister Fahrettin Koca wrote on Twitter.

It would certainly be convenient for Greece to sign some kind of "insurance contract" with a major power that would clearly stipulate its armed support in the event that we come under a military attack. There is no such thing, however, and it's high time we came to terms with that.

A modeling agent associated with disgraced U.S. financier Jeffrey Epstein has been charged in France with sexual harassment and the rape of minors over 15 years old.

Jean-Luc Brunel was arrested as part of an ongoing investigation on Wednesday at Charles de Gaulle airport as he was preparing to take a flight to Senegal.

Speaking at an annual news conference in Moscow, Putin stressed that the region is an integral part of Azerbaijan according to international law.

Several heads of state and leaders met French President Emmanuel Macron in the last 10 days leading up to his positive COVID-19 test results announced on Dec. 17.

Macron on Wednesday met Portuguese Prime Minister Antonio Costa at the Elysee Palace. Costa's office announced Dec. 17 that he entered quarantine as a precaution and will continue working remotely.

Moderna's coronavirus vaccine was set for imminent approval in the U.S. on Dec. 17, as COVID death tolls climbed around the world, with Europe becoming the first region to pass 500,000 fatalities and Brazil notching more than 1,000 deaths in 24 hours. 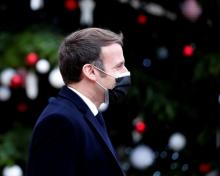 French President Macron was tested for Covid-19 after symptoms first appeared. He would go into isolation for seven days, the Elysee Palace said, without providing further details on the nature of the president's symptoms.

The office of Macron's wife Brigitte Macron told dpa that she was considered a close contact but hasn't shown any symptoms so far.