BELGRADE - May 9, marked as the day of victory over fascism and Nazism in World War II, is also celebrated as Europe Day to commemorate the day when the then French foreign minister Robert Schuman laid the foundations of a united Europe in 1950.


BELGRADE -- The marking of Day of Victory over Nazism in World War II started late on Thursday with a ceremonial artillery salute fired from the Belgrade Fortress. 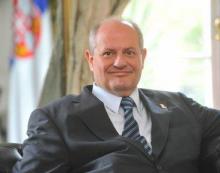 BELGRADE -- Former Serbian Foreign Minister Ivan Mrkić will become an adviser to the president, and will also work in some government committees, writes a daily.

MADRID - Serbia's Ana Ivanovic is through to the quarterfinals at the WTA Premier Mandatory event in Madrid, after beating Russia's Anastasia Pavlyuchenkova 6-1, 6-2 on Thursday.

Pavlyuchenkova, who defeated Jelena Jankovic in a marathon match Wednesday evening, did not stand a chance against the more focused and motivated opponent.

Sxity-two percent of the EU voters are “not at all” or “not much” interested in the European Parliament elections in May, shows a survey of Ipsos-MORI.

It was conducted in April. A total of 8 833 people were polled in Belgium, Britain, Croatia, France, Germany, Hungary, Ireland, Italy, the Netherlands, Poland, Spain and Sweden.

A Soviet monument in Bulgaria's capital city of Sofia has been painted with the flags of Ukraine and the European Union, Thursday.

BELGRADE - Nebojsa Stefanovic, Serbian Minister of the Interior who up until recently held office as the Serbian parliament speaker, won the recognition Najevropljanin 2013 (Best European of the Year) for politics.