Turkish Foreign Minister Mevlüt Çavuşoğlu on Feb. 24 discussed the coronavirus outbreak in the country's eastern neighbour as well as the recent earthquake with his Iranian counterpart.

Turkey has started to screen travelers arriving from Iran at border gates and is refusing entry to anyone with signs of illness after four people died from the new virus that emerged in China, along with 750 suspected cases.

Zarif expressed support for the stances of the Palestinian people and leaders against the "unilateral" plan of the U.S., Iran's Foreign Ministry said in a written statement.

The temporary stay in the case was granted on Feb. 3 to allow for the bank's requests to be heard by a three-judge panel.
The court said it would take up Halkbank's requests on an expedited basis.

Turkish Foreign Minister Mevlüt Çavuşoğlu met on Feb. 2 with his Palestinian counterpart Riyad al-Maliki in Saudi Arabia's capital, which is set to host a high-level meeting on the Israeli-Palestinian conflict.

Business is booming at Iran's largest flag factory which makes U.S., British and Israeli flags for Iranian protesters to burn. 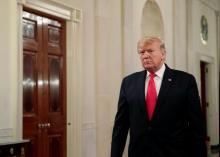 The United States will not lift sanctions on Iran in order to negotiate, U.S. President Donald Trump tweeted late on Jan. 25, seemingly in response to a Der Spiegel interview with Iran's foreign minister.

"Iranian Foreign Minister says Iran wants to negotiate with The United States, but wants sanctions removed. No Thanks!" Trump tweeted in English on Jan. 25 and later in Farsi.

The United States has imposed new sanctions on Iran today, Reuters quoted as referring to the US Treasury Department's website.

The subject of the new sanctions are two individuals and six international companies, including four companies that work with the National Iranian Oil Company.

A racehorse belonging to Reza Zarrab, a Turkish-Iranian businessman who was arrested in the U.S. in 2016 over evading sanctions on Iran, had to leave his champion-style life in a hippodrome to live a more modest life on a simple ranch on the outskirts of Istanbul.