National Coordination Body has published specific conditions for entering Montenegro.
The IPH proposal states that the mitigation of measures was conceived taking into account the current level of the new coronavirus in Montenegro and the surrounding countries, and after consultations with representatives of the tourism industry and the association of hoteliers and caterers.

The Ministry for Veterans' Affairs of Sarajevo Canton told BIRN that it set aside 2,680,000 Bosnian marks (1,370,000 euros) from 2013 to 2020 to help mainly Bosniak former Bosnian Army soldiers and police officers who are on trial for war crimes and their families.

Radovan Paprica, alias Papro, and Slavko Ognjenovic, alias Macak, went on trial at the Bosnian state court on Monday for raping a woman in the village of Miljevina, near Foca, on June 9, 1992.

They allegedly committed the crime with another man, named only as Nedjo.

The indictment alleges that Ognjenovic took the woman to an empty flat, where she was first raped by Nedjo.

Radovan Paprica and Slavko Ognjenovic pleaded not guilty at the Bosnian state court on Wednesday to crimes including rape and sexual abuse in the Foca area between early April 1992 and late March 1993.

"I plead not guilty to all charges. I shall prove that with substantiated evidence," Paprica said when asked by the court to enter his plea.

Jankovic, who was held in detention under Zornic's supervision, was promised that she would be included in a prisoner exchange in the Sarajevo neighbourhood of Grbavica, but instead she was taken to an abandoned house, where she was shot in the head. The same thing happened to Ninkovic.

The Bosnian state court announced on Friday that it has confirmed an indictment charging Zeljko Novakovic with committing crimes against humanity during attacks on several Bosniak-populated villages in the north-western Bosanski Novi area between early May and September 1992.

On 22 October, the Bulgarian Ministry of Defence announced that the special forces of the nine member states participating in the Bucharest 9 Initiative (B9) started the multinational military drill "Thracian Sword - 2018" at the Novo Selo Training Area. This year, Bulgarian special forces are hosting the annual B9 exercise from 22 to 26 October, reports ArmyRecognition.

According to a retired general of the so-called Army of the Republic of Bosnia-Herzegovina, the war is not over - it is merely that the shooting has stopped. This has been reported by EuroBlic on Tuesday.

According to a retired general of the so-called Army of the Republic of Bosnia-Herzegovina, the war is not over - it is merely that the shooting has stopped.

This has been reported by EuroBlic on Tuesday. 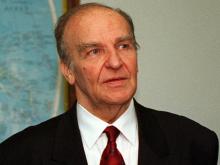 "Alija, as leader in the fight for Bosnian Muslims, enabled the survival of Europe's most important Islamic community," Erdogan tweeted.