Aegean Airlines announced on Tuesday it is adding 16 new destinations in 10 new countries to its network next summer, reaching a total of 134 destinations, 34 domestic and 100 abroad in 42 countries.

Some 14,000 militants of the Syrian rebel group have abandoned Aleppo, while its commander has fled to Turkey, according to Turkish security sources The Free Syrian Army (FSA), the recognized armed opposition group against the Bashar al-Assad in Syria, has ceased its resistance in Aleppo, Syriaâs second biggest city, withdrawing its 14,000 militia from the city, a ranking Turkish security so

BELGRADE - The Serbian delegation will harmonise and draft the agreements on airline transport with the U.S. and 13 more countries during the ICAO Air Services Negotiation Event (ICAN) in Indonesia, which will make room for network expansion of Serbia's national airline company Air Serbia.

Iran and Turkey should continue their gas price negotiations until they can find an acceptable price for each other, the Iranian ambassador to Turkey has said, signaling a decrease in the price of Iranian gas to Turkey.

Gulf leaders agreed Nov. 16 on the return of Saudi, Emirati, and Bahraini envoys to Qatar after an extraordinary meeting in Riyadh, promising an end to eight months of tense relations. 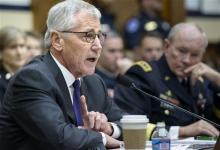 Senior U.S. officials have denied that the Obama administration is reviewing its Syria policy to include the ousting of Syrian President Bashar al-Assad in the program, reiterating that Iraq remains the current focus.

Vast areas of land and sea have become environmental sanctuaries in recent years but the world is not funding them adequately, the United Nations warned Nov. 13.

The United Nations Environment Programme (UNEP) said that countries were on track to meet targets to protect 17 percent of land and 10 percent of marine areas by 2020.

There are currently some important developments happening in the Middle East. The U.S. is in contact with Iran over their common enemy, the Islamic State of Iraq and the Levant (ISIL). Russia and Iran have concluded new deals in the nuclear energy sector, which will consolidate their political and military ties.