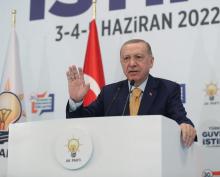 "We will address security concerns with new operations," the president said, addressing his ruling Justice and Development Party's 30th Consultation and Assessment meeting.

The charging of the Louvre's former director in an antiquities trafficking investigation has shone a light on a vast, transnational criminal problem that remains fiendishly difficult to target. 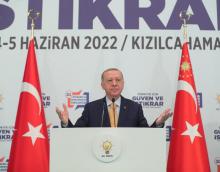 Turkey is taking steps to establish a 30 kilometer security zone south of its border with Syria against the threat posed by the PKK/YPG terror group, President Recep Tayyip Erdoğan said on June 4.

Dust clouds dragged from Syria by strong winds have covered the skies over many southeastern and central Anatolia provinces on June 3.

"People residing in these provinces should not go out if not necessary, or wear face masks," prominent meteorologist Orhan Şen said.

Deputy Foreign Minister Sedat Önal held a telephone conversation on June 2 with Permanent Representative of the US to the United Nations, Linda Thomas-Greenfield discussing the developments in Syria including Turkey's planned military operation into the neighboring country.

"Mehmet Doğan, codenamed 'Dılhaz Gabar,' was neutralized in an operation conducted by MİT in the Cemcemal neighborhood of Sulaymaniyah," the agency reported on June 2.

When Eden Cami closes her eyes and starts singing ancient tunes in Arabic and Hebrew, Jewish-Israeli bassist Or Rozenfeld plays the contrabass, and Syrian band member Wassim Mukdad creates sparkling sounds on his 12-string oud, they take their audience on a musical journey through the Middle East.

A senior Turkish official has called on the European Union to treat Turkey fairly, underlining that the candidate country's reform process will be accelerated to the extent consideration for full membership is strengthened.

Turkey and the EU held the "Political Dialogue Meeting" at the level of political directors of both sides following a three-year hiatus.