Turkey, Russia, and Iran plan to hold an online trilateral summit with the participation of their leaders aiming to discuss Idlib in northwestern Syria and the efforts for a new Syrian constitution, Foreign Minister Mevlüt Çavuşoğlu said on June 11.

Security forces in Adana province began inspections on the six suspects, whose addresses were surrounded and searched during the operations.

The suspects were taken to police headquarters following health controls.

Turkish President Recep Tayyip Erdoğan on June 10 spoke over the phone with his Russian counterpart Vladimir Putin to discuss the latest situation in Libya and Idlib, northwestern Syria.
According to the Turkish Communications Directorate, the two leaders also discussed regional issues and steps to be taken in the post-pandemic period.

The directorate said in a statement that the leaders exchanged views on bilateral relations and regional developments, including the Libyan crisis.

Turkey and the U.S. are approaching a new era in ties over the handling of the situation in Libya, President Recep Tayyip Erdoğan said June 8.

A new era can begin in bilateral relations on the transition process in Libya, Erdoğan told national broadcaster TRT.

The dismissal of three opposition lawmakers is "is an obligatory requirement of the justice and democracy ethics," leader of the Nationalist Movement Party (MHP) Devlet Bahçeli said on June 8.

"Everyone is equal before the law. Nobody has the privilege or freedom to commit a crime," Bahçeli said in a written statement.

A Turkish soldier, who was injured in Syria's northwestern Idlib in April, succumbed to his injuries, the National Defense Ministry said on June 7.

The ministry said the soldier was injured during Turkey's Operation Peace Spring and offered condolences to the family of the killed soldier, the Turkish Armed Forces and the Turkish nation.

Donald Trump offered to help his Russian counterpart Vladimir Putin to put out vast wildfires raging across Siberia, the Kremlin has revealed.

The US and Russian presidents spoke by phone at Washington's initiative in a move Mr Putin took as a sign that damaged ties can be restored, the Kremlin said. 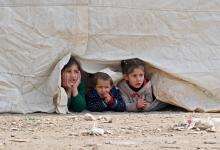 Turkey has said that even though the humanitarian crisis in Idlib, Syria is partially off the agenda due to the coronavirus pandemic, it should not be ignored by world leaders.

Addressing an aid meeting in southern Hatay province on June 7, the country's interior minister said Turkey has managed to deal with the virus outbreak amid a migration wave.

Hami Aksoy said: "We reject the unfounded accusations of Egyptian Foreign Minister Sameh Shoukry against Turkey within the context of Libya in the meeting of the Foreign Ministers of the Global Coalition to Defeat ISIL Small Group on June 4, 2020.