Romanian tennis player Andreea Prisacariu won her second ITF career title on Sunday, in Tabarka (Tunisia), tournament with total prizes of 15,000 dollars, after the previous week she had won in the same place.

Olive oil is Greece's fourth most important export, with sales abroad totaling 524.5 million euros in 2018. However, Greece keeps losing market shares to its main competitors, Italy and Spain, as well as rising players in the international market, such as Tunisia. 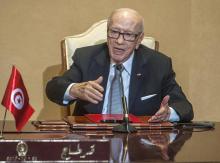 Tunisia is inviting world leaders to attend the funeral for its president who died in office and preparing a new election to replace him.

We forecast a slight decrease in tourist arrivals in the summer season of 3% to 6% for the whole country and between 5 and 8% for the Black Sea coast, Tourism Minister Nikolina Angelkova told journalists at the National Assembly, Focus News Agency reports.

Dozens of African migrants capsized off the coast of Tunisia on July 3after setting off by boat for Europe from Libya, a government source and the Tunisian Red Crescent said.

A policeman was killed in one of two suicide bombings today in the Tunisian capital Tunis, the BNR reported, quoting Reuters.

At least eight people have also been injured in the double attack on Thursday, the government said.

The second assault was carried out at a police station in the al-Qarjani district, injuring four security forces officers, the Interior Ministry said.

Estonia, Latvia, Lithuania and Poland signed with European Commission President Jean-Claude Juncker and his deputy, Maroš Šefčovič, in charge of the Energy Union, a road map for synchronization of their grids with the Continental European Network, quoted by Econ.bg