Voicing regret over "unfair international criticism" of Turkey over foreign fighters using the country as a transit point to join Islamic State of Iraq and the Levant (ISIL) fighters, Interior Minister Efkan Ala has tasked Turkish ambassadors to "tell the world about the facts."

Two Islamist newspapers in Turkey have drawn ire on social media with their headlines that "justified" the deadly attack on a French satirical newspaper.

Hours after gunmen stormed the offices of the satirical weekly Charlie Hebdo in Paris, chanting "Allahu Akbar" (God is greatest), Yeni Akit newspaper chose the title, "Attack on the magazine that provoked Muslims."

The Council of Europe has hailed Turkey?s decision to allow the building of a new church for the Syriac community in Istanbul, which will be the first new church to be built in the country in nearly a century. 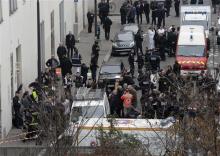 Two Turkish government ministers have condemned the deadly shooting attack on a French satirical newspaper, while also calling on Europe to tackle the rise of Islamophobia.

A large majority of Turkish people, 73 percent, said they would be willing to fight for their country if there were a war that involved Turkey, Gallup International's annual global End of Year survey has shown.

Globally, 60 percent of the people surveyed said they would be willing to take up arms for their country while 27 percent would not be willing.

A ceremony for the opening of new campus at a private university in Ankara offered a stage for Turkish President Recep Tayyip Erdo?an to state that his aspiration to change the jargon of politics also extends to a redesign of the lexicon of academic life.

The prohibited Marxist DHKP-C group claimed responsibility for the suicide bombing attack carried out in Istanbul on Tuesday.

The group, which is considered a terrorist organisation by Turkey, the EU and the US, claimed responsibility for the attack on its website, the BBC reports.

Turkey has lagged behind other emerging markets in competitiveness levels and returned to the 1980s in terms of attracting foreign direct investment (FDI), World Bank Director for Turkey Martin Raiser said on Jan. 6, as reported by Cihan News Agency.

Turkey?s olive oil exports have decreased by almost 50 percent in the last two months from the same period of the previous year as producers kept their products in stock with the expectation of a rise in prices, according to sector representatives.

Palestinian Authority President Mahmoud Abbas will visit the Turkish capital of Ankara on Jan. 12 to discuss the repercussions of the U.N. Security Council's failure to adopt a draft resolution setting a deadline for the ending of Israeli occupation, a Palestinian diplomat has said.