An attorney for a Motorola subsidiary has asked New York’s top state court to allow it to freeze the assets of Turkish Uzan family held by a branch of an international bank in the United Arab Emirates.

French fighter jets took off from the UAE on Monday as France joined Britain in conducting spy flights over Iraq in support of US air strikes against Islamic State militants.

A few Arab countries are ready to offer assistance in the air strikes carried out against the Sunni militants in Iraq and Syria, according to US officials.


BELGRADE -- The foreign exchange (FX) reserves of the National Bank of Serbia (NBS) amounted to EUR 10,949.2 million at the end of August.

This covered M1 by 304 percent and more than seven months of imports of goods and services.

BELGRADE - The foreign exchange (FX) reserves of the National Bank of Serbia (NBS) amounted to EUR 10,949.2 million at the end of August, covering M1 by 304 percent and more than seven months of imports of goods and services.

The largest inflow to FX reserves, EUR 748.3 million, came from the disbursement of a loan from the United Arab Emirates, the NBS said in a release on Friday.

BELGRADE - Vladimir Todoric, a member of the presidency of the opposition Democratic Party (DS), submitted a motion to the Constitutional Court of Serbia on Friday for assessing the constitutionality of the law ratifying the agreement on cooperation between the governments of Serbia and the Unites Arab Emirates (UAE). 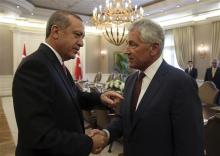 Turkey and the United States have launched talks to discuss potential ways of cooperating against the Islamic State of Iraq and the Levant (ISIL) following a proposal by Washington to form an anti-terror coalition against the rapidly expanding jihadists.

Unable to persuade Qatari leaders to drop their support for the Muslim Brotherhood and other Islamist groups, Saudi Arabia appears determined to deprive its tiny neighbor of its regional football supremacy.