The US are putting together a coalition to counter Islamic State militants in Iraq but no ground troops will be committed, US Secretary of State John Kerry said on Friday.

BELGRADE - Serbian Defense Minister Bratislav Gasic has met with Romanian Minister of National Defense Mircea Dusa on the sidelines of the 2014 NATO Summit in Wales.

Prime Minister Antonis Samaras, in Wales for a two-day NATO summit, was expected to meet with Turkey's new President Recep Tayyip Erdogan on the sildelines of the event Friday.

Seeking to counter Russian aggression, NATO leaders approved plans Friday to post several thousand troops in Eastern Europe who could quickly mobilize if an alliance country in the region were to come under attack.

NATO leaders on Sept. 5 accused Russia of failing to take "a single step towards peace" in Ukraine even as President Petro Poroshenko voiced "careful optimism" about forging a ceasefire with pro-Moscow rebels.

Turkish President Recep Tayyip ErdoÄan has signalled that he is set to ask U.S. President Barack Obama for the âdeportationâ of Pennsylvania-based Islamic cleric Fethullah GÃ¼len, referring to coup and spying allegations against the GÃ¼len movement. 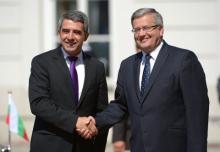 Bulgaria will neither host NATO bases nor deploy soldiers and send weapons to Ukraine, President Rosen Plevneliev said while in Wales for the ongoing NATO summit.

Ukrainian President Petro Poroshenko said a ceasefire plan aimed at ending a near five-month conflict in the east of the country would be signed on Friday.

"Tomorrow in Minsk a document will be signed providing for the gradual introduction of the Ukrainian peace plan," he said on the sidelines of the NATO summit in Wales on Thursday.

Pro-Russian rebels in Ukraine's east have said they are ready to lay down arms if Kiev officials sign a plan outlining the steps to peace.


NEWPORT -- Serbian Defense Minister Bratislav Gašić has said that the ministry he heads is taking an active part in the Partnership for Peace program.