Greece's new president Katerina Sakellaropoulou is on Tuesday afternoon to deliver a message to the nation during which she is expected to refer to Wednesday's March 25 independence day, which will be celebrated in the absence of crowds this year due to the coronavirus epidemic, and on the necessity of the lockdown imposed from Monday. 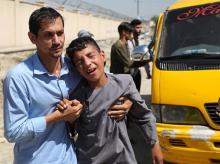 Afghanistan's president is vowing to eliminate all safe havens of the ISIL as the country marks a subdued 100th Independence Day after a horrific wedding attack claimed by the local ISIL affiliate.

With U.S. fighter jets flying overhead, President Donald Trump praised the military and reveled in a show of pomp and patriotism on July 4 in a celebration of Independence Day that critics accused him of turning into a political event.

Turkey's national defense minister arrived in Georgia on May 26 for ceremonies marking its Independence Day, the 101st anniversary of the establishment of the Democratic Republic of Georgia.

A wreath laying ceremony was held in observance of May 9 at the Monument to the WWII Homeland Heroes, near the "Carol I" National Defense University in Bucharest, attended by Defense Minister Gabriel Les and acting Justice Minister Ana Birchall.

Two people were hurt in a blast caused by an "unknown object" in central Kyiv on Aug. 24 as Ukraine celebrated Independence Day, officials said, suggesting it could be the work of hooligans.

The incident, which occurred as U.S. Defence Secretary Jim Mattis was visiting the country, occurred near the site of a military parade. 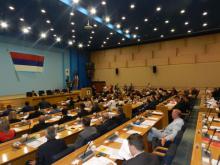 Parliament in Bosnia’s Serb-dominated Republika Srpska entity filed a motion to the state Constitutional court claiming the Independence Day holiday marked in the country’s other entity, the Bosniak-Croat Federation, is unconstitutional.

The Fourth of July has been recognized as Independence Day in the United States ever since the country’s Founding Fathers signed the Declaration of Independence on July 4, 1776. To mark the occasion, Americans celebrate with parades, fireworks, concerts and other festive activities.

Serbia can count on the United States as its partner and friend, Ambassador Michael Kirby has said at a reception hosted to mark his country's Independence Day.