Turkey will have a nationwide curfew spanning the New Year's holiday, from Dec. 31 to early Jan. 4, as part of measures to bring the COVID-19 outbreak under control.

"It has been resolved that there will be new measures at the borders - yes, now it is just a technical question how it will be implemented. So it has been decided," he said.
As he stated, the big question is whether it is possible to control private New Year's celebrations.
"That's why one has to think about restricting movement," he told Prva Television.

"By behaving as if nothing is happening, we will have an explosion after the New Year," Kon told N1.
Speaking about the decisions that were introduced in order to prevent the spread of the coronavirus and possible oversights, he said that there was no "question of error".

The officials are expecting a tourism boom in more than 50 ski resorts in Turkey in the new year despite the ongoing coronavirus pandemic as people have started booking resorts with a 4-day stay, including the weekend. 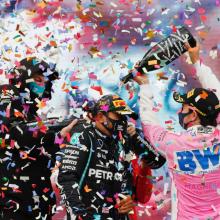 Lewis Hamilton will be awarded a knighthood in the New Year's Honour list after winning his seventh world championship this year.

Hamilton made F1 history last week when he equalled the legendary Michael Schumacher's record with a seventh world-title win. Nobody has won more driver championships than the pair in the sport.

More than 90,000 persons attended the New Year's Eve show downtown Constitutiei Square organised by the Bucharest City Hall, a release by the mayoralty sent to AGERPRES on Wednesday reads. The event dubbed "Revelion 2020. Disco Night Fever" brought the hits of the 80s and 90s and of the beginning of the 2000s.

It's been an 80-year tradition for the Vienna Philharmonic Orchestra to give New Year's concert dedicated to the music of the Strauss family, renowned for waltzes including "The Beautiful Blue Danube" and "Radetsky March."

Novinite.com  wishes you a happy and healthy 2019, full of contentment and joy!

People around the world have been celebrating the New Year, welcoming in 2019 with fireworks and displays long before the U.S.

Billions around the world cheered in 2020 after a tumultuous year dominated by demonstrations calling for political upheaval and action on climate change.

Strike-hit Paris welcomed the New Year with a huge fireworks display while London's Big Ben rang out after a long restoration, as crisis clouded celebrations elsewhere at the end of a year of upheaval around the world. 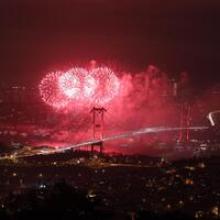 Hundreds of people turned out in Istanbul to watch the spectacular and glittering fireworks at the Bosphorus strait for the New Year celebrations.