Several historians have criticised the Serbian authorities after Chetnik movement leader Dragoslav 'Draza' Mihailovic's picture was displayed alongside that of Partisan leader Josip Broz Tito at a state-sponsored event at the National Theatre in Belgrade on Sunday to commemorate Victory Day in World War II.

And that is because the ideology of Nazism is still alive today, Serbian Minister of Defense Aleksandar Vulin said on Victory Day.

A wreath laying ceremony was held in observance of May 9 at the Monument to the WWII Homeland Heroes, near the "Carol I" National Defense University in Bucharest, attended by Defense Minister Gabriel Les and acting Justice Minister Ana Birchall.

Turkey commemorated the 96th anniversary of the War of Independence on Aug. 30 Victory Day with celebrations, as politicians marked the day's importance and stressed their determination in protecting Turkey's independence. 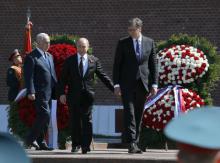 The three leaders previously attended the Victory Day military parade in the Russian capital, organized every year on May 9 to mark victory over fascism in the Second World War.

The ceremony at the Kremlin Wall included the sounding of the national anthems of the three nations. Putin, Vucic, and Netanyahu also placed flowers at the memorials dedicated to Russia's Hero Cities.

Turkey will preserve its determination to defeat all "threats, attacks and attempts to sabotage its economic and political independence," just as it did in the War of Independence 95 years ago, President Recep Tayyip Erdoğan said in his message marking "Victory Day" on Aug. 30.

Turkey will celebrate the 95th anniversary of "Victory Day" on Aug. 30, which marks the Turkish victory against Greek forces at the Battle of Dumlupınar, the final battle of the War of Independence in 1922. 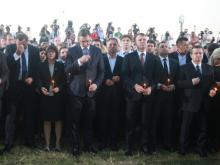 Members of the Serbian Army are rehearsing ahead of the celebration of Army Day and Victory Day on May 9 in Zrenjanin, northern Serbia.

?hsan Özkes, who became independent deputy after resigning from the Republican People?s Party (CHP) in late July, has caused controversy for praising the presidential palace with reference to the Prophet Muhammed, even though he criticized the same gargantuan edifice five months ago while also invoking the prophet.