BELGRADE -- The pressure that Serbia has been subjected to because of its decision to take part in the Victory Day parade in Moscow is "impermissible."

KIKINDA - Russia's Ambassador to Serbia Alexander Chepurin on Monday presented Russian anniversary state medals to three Serbian war veterans from Kikinda for their contribution to the victory over fascism in World War II. 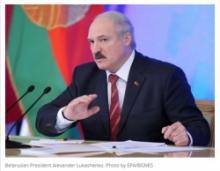 Belarusian President Aleksandr Lukashenko has said he will not attend Victory Day celebrations in Russian capital Moscow on May 9.

Lukashenko has cited the need to receive Minsk's own parade marking the 70th anniversary since the end of World War Two in 1945.

BELGRADE - Serbia's decision to send troops to the Victory Day parade in Moscow shows that dignity is not an empty word for Serbs, and Western pressure - however strong - cannot upset the brotherly relations between Serbia and Russia, says Russian Ambassador to Serbia Alexander Chepurin.

Russia's Ambassador to Montenegro, Andrej Nesterenko, on Wednesday accused Montenegrin President Filip Vujanovic of changing his mind about whether to take part in the Victory Day parade in Moscow, having first said he would go before later saying he would not.

BELGRADE -- An EP official's statement about the participation of Serbian soldiers in the Victory Day parade in Moscow is "a clear warning," says a former diplomat.

BUDAPEST - Serbian Foreign Minister Ivica Dacic said Tuesday that Serbia's decision to take part in the Victory Day military parade in Moscow on May 9 would not be liked by everyone, but Serbia was pursuing a sovereign foreign policy conforming to its national and state interests.

Serbian army will march on the Red square in Moscow for the first time in history.