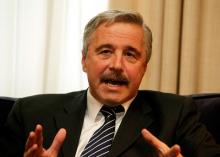 Investor interest in bidding for permits to explore for oil and natural gas off Greece is stronger than expected, Energy Minister Yiannis Maniatis said.

The report published by SEE Change Net on Wednesday says that tens of millions of euro have been lost by south-eastern European countries due to high-level corruption in the energy sector.

LONDON - In a move designed to boost long-term lending to local businesses and private borrowers in the Western Balkans and Croatia, the European Bank for Reconstruction and Development (EBRD) is extending up to EUR 500 million for on-lending to partner banks.

Barroso will meet with senior officials in the Serbian government, a statement said.

President Rosen Plevneliev will take part in the meeting of the heads of state and government of the South East European Co-operation Process (SEECP) countries on June 25.

This is the highest level of political dialogue in the region in this format, according to the President's press office.

The SEECP was launched on Bulgaria's initiative in 1996.

Albania has been granted an EU candidate status on Tuesday, during the meeting of EU ministers in Luxembourg.

The European Union set Albania on the road to membership on Tuesday, agreeing to give the small Balkan state the status of candidate to join in recognition of the government's recent reform efforts.


BRUSSELS -- EU foreign ministers have decided to propose that Albania be given candidate status for membership, according to EU Enlargement Commissioner Stefan Fule.

The decision to grant Albania candidate status for membership was announced by the EU's Enlargement Commissioner Stefan Fule on Tuesday.

Albania and the CEZ Group announced on Tuesday that they had reached an amicable agreement over the renationalisation of the power company, which will see the Tirana authorities paying what has been estimated to be tens of millions of euro in damages.

BELGRADE - Serbian Minister of Foreign Affairs Ivica Dacic criticized Albania on Monday stressing that it did not act appropriately towards Serbia during recent floods.

During the floods that hit countries in the region, Serbia included, there were countries which have not contributed to creation of the spirit of solidarity and unity, Dacic said, adding that one of them was Albania.

BELGRADE - The short story festival Kikinda Short 09 will take place in five cities and three countries from July 2 to 5, and gather 20 authors from 14 countries who will read their stories to the audiences in Kikinda, Szeged, Timisoara, Zrenjanin and Belgrade, announced the festival organizer, Kikinda Short association.

Albania criticized for stance during floods


BELGRADE -- Serbian Foreign Minister Ivica Dačić on Monday noted that "some countries" did not act properly toward Serbia when the country was hit by the floods in May.

According to a Beta news agency report, Dačić said that "an official reaction" would be sent to these countries.

BUCHAREST - The Regional Cooperation Council (RCC) has prepared a South East Europe 2020 strategy (SEE 2020) to help governments improve economies and create new jobs, participants of the First meeting of the Governing Board of the RCC SEE 2020 Strategy in Bucharest have said.