Today, the government in Minsk approved a list of countries it considers "unfriendly". 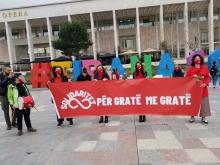 The findings of a study on "Violence against women in politics", conducted by UNDP in cooperation with Albania's Ombudsman and Commissioner for Protection from Discrimination, were published on Wednesday at a roundtable held in the Albanian parliament.

Authorities in Albania face questions over the proportionality and effectiveness of surveillance practices.

If found guilty, Pooladrag faces up to 10 years for the first charge and up to 15 for the second. He is suspected of working for the Iranian secret services and of eavesdropping on The People's Mujahedin of Iran, MEK, an exiled Iranian opposition group many of whose members moved to Albania in 2013 on the advice of the US.

An unknown person on Top Channel's show Top Story's Facebook page on Thursday sent shockwaves across Albania after claiming that the TV channel's bosses had cancelled the airing of an important documentary entitled "The Oligarchs of the Urban Renaissance".

Albania's Minister for Europe and Foreign Affairs, Olta Xhacka, said Albania was joining EU and Western sanctions on Russia over the invasion of Ukraine, presenting its raft of measures on Sunday.

NATO says the upgrade will bring the base - once home to Soviet- and Chinese-made MiG fighter jets - up to alliance standards by renovating the runways, taxiways, and storage facilities.

Moldovan experts hope their judicial vetting process can follow the best examples of the same process in Albania - but avoid the pitfalls.

Albania remembers the Catholic nun who inspired Pope Francis with with her tale of courage - having secretly kept the faith alive under a brutal dictatorship.

Hoxha was the First Secretary of Politburo until his death in 1985, when he was replaced by Ramiz Alia until the Communist regime was ousted. Also on display at the exhibition are portraits of officials from the state security service, senior police and judicial figures and chiefs of prison camps.

An exhibition of drawings by Albanian artist Ina Elezi, based on her conversations with former prisoners who were jailed at Spac, where Albania's Communist regime used political detainees as forced labour, went on display on Sunday at the Destil Creative Hub in Tirana.

Munich – President Borut Pahor took part in a panel debate on the Western Balkans at the Munich Security Conference on Sunday, arguing the EU enlargement process should be stepped up and offering the EU as the answer to all the issues troubling the region.

The Institute for Democracy, Media and Culture NGO launched a petition on Thursday evening in Tirana which will be presented to parliament calling for legislation to curb the enduring influence of dictator Enver Hoxha's former Communist regime.

With Albania in the final stages of drafting a new strategy for tackling violent extremism, experts say authorities must do more to address the online propaganda that is helping to radicalise some Albanians.

Albania's President, Ilir Meta, will end his mandate in office after winning a Constitutional Court battle with the ruling Socialist Party, which dismissed him via a vote in parliament nine months ago.

In a verdict on Wednesday, the Court said the accusations made against Meta "do not constitute serious violation of the constitution".