All News on Social Issues in Bosnia and Herzegovina

2021 was a grim year for what are called "European values".

Sarajevo – Interior Minister Aleš Hojs took part in a regional ministerial conference in Sarajevo on Thursday, advocating the strengthening of cooperation and partnership in the Western Balkans region regarding migration management and maintaining security, said the Interior Ministry.

Nearly half of young people in Bosnia and Herzegovina, 47 per cent, are thinking of leaving the country, a survey issued by the United Nations Population Fund, UNFPA, published on Wednesday, says.

The example of Kotez is replicated in other towns and cities in Serbia, and in the Balkans, and explains the noticeable rise in the employment rate of Roma people, mainly in lower-paid service sectors, due to a shortage of labour.

Turkey on Oct. 14 voiced concern over the "recent racist attitude which contradicts the spirit of sports" in Serbia against handball teams from the city of Novi Pazar.​​​​​​​

After a number of European media outlets published disturbing footage of a violent migrant pushback on Croatian territory last week, government officials condemned the incident - but insisted it was an act of individuals, not of the police as an institution.

Migrants are suffering sometimes-violent illegal pushbacks carried out by special police units at the EU's borders, especially Greece and Croatia, an investigation published on Oct. 6 by media including Germany's Der Spiegel found. 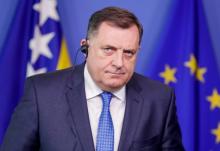 He was tall and athletic, with close-cropped hair and a black leather jacket. Back in his twenties, he played professional basketball for clubs in Bosnia and Switzerland until, he says, the crisis hit and the money ran out. Now in his early thirties, he has his own business, cleaning and maintaining the facades of Belgrade's skyscrapers.

Ljubljana – The Slovenian police have teamed up with Europol and police forces from the Western Balkans for a campaign against online abuse of children and youths in the region, which starts this week.

Koper – The police have uncovered a criminal ring that has been smuggling migrants from Bosnia through Croatia and Slovenia to Italy. According to the Koper Police Department, the ring consisted of six members – four Slovenians, one Kosovo national and one national of Bosnia and Herzegovina.

The group called on Muslims and Christians to "join us against this plague".

His team also visited Bosnia, seeing the tough situation on the ground and talking to migrants, listening to their points of view.

"The police and Interior Ministry are on TV every day, but these people never get a voice," the 29-year-old director states.