BELGRADE - Serbian President Tomislav Nikolic will attend a donor conference dedicated to repairing the damage from the floods in Serbia and Bosnia-Herzegovina, and the event will be held in Brussels on July 16, Serbia's Foreign Minister Ivica Dacic said on Wednesday.

BELGRADE - Serbian Parliament Speaker Maja Gojkovic conferred on Tuesday with Dominique Mamberti, Secretary of the Holy See for Relations with States, and expressed gratitude for the Vatican's support and Pope Francis' appeal for aid to flood victims in Serbia and Bosnia-Herzegovina.

Parties start putting forward their candidates on Wednesday for the October 12 polls, at which voters will cast ballots for the tripartite presidency of Bosnia and Herzegovina, the House of Representatives of the state-level parliament and the parliament of the Federation entity, the National Assembly of Republika Srpska and its president and vice-president, as well as assemblies of the ten can

BELGRADE - Serbian President Tomislav Nikolic has thanked European Commission (EC) President Jose Manuel Barroso for the support for Serbia on its path towards the EU, adding that Barroso has come to visit "Serbia, the next member state of the EU."

ANDRIĆGRAD -- Milorad Dodik says the Serb people in Bosnia will continue fighting for autonomy, hoping that the political process will eventually result in the independence.

He made the remarks on Saturday, St. Vitus Day (Vidovdan), during the opening of the cultural and historical complex dubbed Andrićgrad. 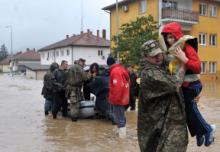 Armies in the Balkans show co-operation in crisis situations

OBRENOVAC - The European Union will continue to assist Serbia in remedying the consequences of the May floods because solidarity is the essence of Europe, European Commission President Jose Manuel Barroso said in Obrenovac on Sunday. 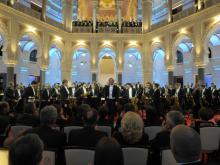 The concert by the Vienna Philharmonic in the recently re-opened Vijecnica, the historic Sarajevo City Hall, was the central event to mark the centenary of the killing of Archduke Franz Ferdinand by Bosnian Serb Gavrilo Princip on June 28, 1914.

Few hundred people could follow the the concert in a plateau on the other side of the river of Miljacka.

BELGRADE - Serbian Minister of Culture and Information Ivan Tasovac is staying in his first official visit to Macedonia, during which he participated in the Annual Meeting of the Council of Ministers of Culture of South East Europe, during which the Regional strategy on cooperation in the culture sector in South-East European countries was adopted on Saturday.

BELGRADE - Today marks 100 years since the June 28, 1914 assassination at Sarajevo of Archduke of Austria-Este Franz Ferdinand that Austria-Hungary used as an excuse for invading Serbia and starting World War One.

A concert by the Vienna Philharmonic is included in the program and designed to be the focal point of official ceremonies. 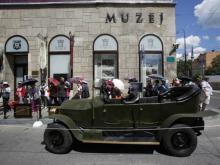 Bosnia on Saturday is staging a range of cultural events to mark the centenary of the killing of Archduke Franz Ferdinand by Bosnian Serb revolutionary Gavrilo Princip on June 28, 1914, although Serb politicians are staging parallel commorations.

SARAJEVO -- As part of events marking 100 years since the outbreak of WW1, a monument to Gavrilo Princip has been unveiled in the newly built city park in East Sarajevo.

The statue was cast in bronze and is two meters tall, the work of Belgrade-based sculptor Zoran Kuzmanović.

SARAJEVO -- The shot that echoed in Sarajevo on June 28, 1914, was not a shot fired at freedom, but at the occupiers, Gavrilo Princip's nephew, Nikola Princip, has said.

He spoke ahead of the 100th anniversary of the assassination of Archduke Franz Ferdinand.