Dozens of Turks and Bosnians celebrated Prime Minister Recep Tayyip Erdogan’s victory in Sunday’s local elections by gathering to celebrate in Ilidza in Sarajevo and driving through the city honking their car horns and waving AK (Justice and Development) Party flags alongside those of Turkey and Bosnia.

"Borders will not be redrawn in Balkans"

SARAJEVO -- The British foreign minister says there will be no more drawing of borders in the Balkans and that only a united Bosnia in its present borders can join the EU. 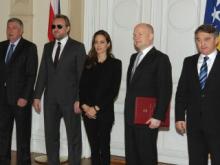 Bosnia's Foreign Minister, Zlatko Lagumdzija, met his British counterpart, William Hague, on March 28 to discuss the European Union's "new approach" to Bosnia and Herzegovina, which involves focusing on economic and social issues instead of on constitutional changes.

Tuzla Canton is the first in Bosnia and Herzegovina to get a new government since the mass protests that started in February forced four of the Federation entity's ten cantonal governments to resign.

Members of Tuzla Canton's new government held their first meeting on March 27 after the cantonal assembly confirmed their posts the night before.

Investigators have discovered a mass grave that could contain the bodies of almost 150 murdered Bosniaks in the village of Oborci near the central Bosnian town of Donji Vakuf.

BELGRADE - President of the Coalition of Refugee Associations Miodrag Linta has noted that the Serbs in Croatia are in a difficult position, including the expelled ones, as they cannot exercise their basic human rights.

The City Council of Sarajevo has withdrawn its decision, made in February, to make Zagreb Mayor Milan Bandic an honorary citizen of the Bosnian capital owing to his recent statements backing a third, Croatian entity for Bosnia and Herzegovina.

Deputy Sarajevo Mayor Aljosa Campara said he hoped the decision would not harm relations between Sarajevo and Zagreb.

BANJA LUKA -- The Serb entity in Bosnia-Herzegovina will not allow this country to join the EU and U.S. sanctions against Russia, RS President Milorad Dodik has said.

Bosnia's path to NATO membership is complicated by neighbouring Serbia's unclear attitude towards the alliance, a conference held on March 25 in Sarajevo by the Atlantic Initiative heard. 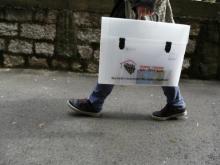 Only 15 per cent of citizens expect the results of the 2013 population and household census in Bosnia to show the factual situation, according to a survey by PopisMonitor, which has closely followed closely the census and post-census processes.

The same analysis showed that 40 per cent of people did not believe the census figures reflected the truth.

Vucic said after a meeting with Republika Srpska’s leader Milorad Dodik in Belgrade on Saturday that his administration would always protect Republika Srpska, the Serb-dominated entity in Bosnia.

Mostar airport has announced that Italian airline Meridiana will run direct flights to Milan from April to September this year, while Mistral Air will reactivate its connections to Bari and Napoli and is also preparing to launch other destinations including Rome.

Serbia got "a powerful government and institutions" after the snap parliamentary poll, Dodik told a joint news conference after a meeting with Serbia's Deputy Prime Minister Aleksandar Vucic in Belgrade.

ZAGREB - The Serbian Democratic Forum (SDF) accused on Friday the Croatian government that its announcement that it would remove the refugee status from the people who fled Croatia during the 1990s war was intended to stop the return of Serb refugees and complete the ethnic cleansing.