There is no reciprocity in this latter demand, despite repeated judgments of the European Court of Human Rights in Strasbourg calling on Bulgaria to recognise a Macedonian minority in Bulgaria, which successive Bulgarian governments have ignored. 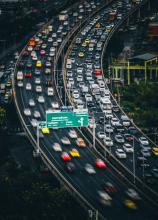 Ljubljana – Traffic has been slow on Slovenian roads throughout the day and the weekend, with long waiting times at some border crossings with Croatia and Austria. The situation has been further aggravated by an accident on the busy motorway near Postojna, SW, with the travel time prolonged by 90 minutes, according to the Traffic Information Centre.

Against the background of inflation affecting European countries, minimum wage workers in 15 out of 21 Member States with statutory minimum wages registered a decline in their wages in real terms between 1 January 2021 and 1 January 2022. This was despite comparatively large increases in nominal rates in the EU during the period.

Golnik – The Golnik Clinic of Respiratory and Allergic Diseases is one of Slovenia’s main lung cancer treatment facilities, diagnosing about 40% of some 1,500 new cases of the disease that get detected in the country every year. Its register of patients shows encouraging progress in treatment in the past decade.

US President Joe Biden has nominated Kenneth Merten as new US ambassador to Bulgaria. This is stated in a statement by the White House.

Merten (b. 1961) is a career diplomat. Until recently, he was a Chargé d'Affaires at the US Embassy in Haiti. He previously served as Deputy Assistant Secretary in the Bureau of Global Talent Management.

"Croatia does not accept that the Serbian prosecutor's office raises indictments against non-Serb citizens living on the territory outside of Serbia," said Andrej Plenkovic last night, as Hina reported.
He expressed an opinion that "Serbia, which was an aggressor on Croatia, Slovenia, Bosnia-Herzegovina, now acts as "prosecutor's office or court" and said that "it will not pass".

Belgrade Higher Court said on Wednesday that it has confirmed the indictment of four high-ranking Croatian Army members for committing war crimes against civilians during Operation Storm in August 1995.

Brussels/Ljubljana – Ten EU member states, including Slovenia, have called on the European Commission to amend contracts for the supply of Covid vaccines to reduce the number of doses ordered. They warn about the issue of vaccine surpluses and the need for a better management of public funds.

Vui spoke about the details of the cancellation of the visit on Monday night in the RTS Daily.
"I must say that I am not surprised," Vucic said at the beginning.
"I said that I expect complications... We are skeptical about whatever I say, it was not too much of a surprise. We followed day by day how it went, changes in the route," he said.

Croatia plans to replace its national currency, the kuna, with the euro from January 1 next year