Democratic Left (DIMAR) chief Fotis Kouvelis has denied speculation that he has been asked to be the ruling coalition's candidate for president in elections next year.

There has been neither a proposal, nor a hint. There has been no deal, neither in secret, nor in the open, Kouvelis said during a press conference at Thessaloniki International Fair (TIF) on Wednesday.

An independent Greek deputy who insulted Luxembourg's Prime Minister Xavier Bettel on Twitter on Wednesday apologized for his extreme language, but he said the sentiment remained.

Turks have grown warmer to the European Union over the past year, while concerns about refugees and the governmentâs migration policy have sharply soared against the backdrop of rising tensions between Syrian refugees and locals, according to the latest Transatlantic Trends survey by U.S. think tank the German Marshall Fund.

Dimitris Avramopoulos was on Wednesday appointed European Commissioner for Migration and Home Affairs as incoming Commission President Jean-Claude Juncker announced who gets which job in his team.

The new 28-strong Commission team was unveiled during a news conference in Brussels after weeks of national rivalry over some of the most powerful jobs in the European Union.

Greek consumer prices fell 0.3 percent in August, with the annual pace of deflation slowing from a 0.7 percent drop in July, data from the country's statistics service showed on Wednesday.

August' s reading was the slowest deflation rate since March 2013.

The company, which operates 52 stores in Greece and 14 in Cyprus, Bulgaria and Romania, did not provide a specific figure for the period, the first two months of its fiscal year.

A homemade explosive device detonated at the ATM of a bank branch in the Sykies district of Thessaloniki, northern Greece, in the early hours of Wednesday.

The explosion damaged the cash machine and the buildings facade but no injuries were reported.

Bulgaria's wood exports currently stand at slightly over 329 thousand tonnes, compared to around 166 thousand tonnes for the entire 2013, according to Customs Agency data for exports to Turkey and Macedonia.

Greece on Sept. 9 ratcheted up its punishments for racism, anti-Semitism and hate speech, in a move prompted by the surprise rise of a neo-Nazi party.

Environment and Energy Minister Yiannis Maniatis on Tuesday spoke of encouraging signs concerning the existence of rare earth elements in Greece following a meeting with members of a group of Chinese representatives in Greece to attend an international conference on the subject on the island of Milos.

Employers intend to start hiring in the last quarter of the year in eight out of the nine main sectors of economic activity in Greece, according to the results of a quarterly survey conducted by Manpower on employment prospects.

Car sales in Greece have gathered pace in recent months, following a long slowdown that had resulted in the closure of more than 1,000 dealerships and the loss of an estimated 11,500 jobs. 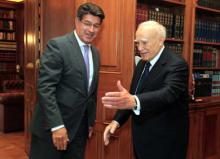 The head of Greeces industrialists, Theodoros Fessas, visited President Karolos Papoulias on Tuesday in Athens and expressed confidence that the Greek economy is already showing stability and signs of recovery.

Findings at the Alexander the Great-era tomb that was recently unearthed near ancient Amphipolis in the Macedonia region of northern Greece have intrigued the Greek public and caused a fair share of excitement.

Fed up with the constant barrage of doom and gloom at home as well as internationally, the people are naturally looking for some good news. 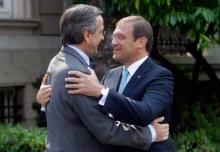 Prime Minister Antonis Samaras on Tuesday sought to douse renewed speculation about the possible need for a third rescue package for Greece, insisting that the country could manage without additional loans from its European partners.