All News on Politics in Macedonia

Greek Prime Minister Kyriakos Mitsotakis on Thursday essentially offered his support to North Macedonia Premier Zoran Zaev and his country's effort to unstick its stalled bid for European Union accession talks but emphasized that Skopje would have to honor the terms of the Prespes name deal.

Senior presidential, government and municipal officials, as well as representatives of war veterans, laid flowers on Friday in front of the monument dubbed 'Mother's Broken Wing' in central Skopje in memory of the 54 young Macedonians who lost their lives amid the collapse of the federal Yugoslav state.

In talks with North Macedonia Prime Minister Zoran Zaev, Greek PM Kyriakos Mitsotakis on Thursday underlined the importance of the so-called Prespes accord being honored if the Balkan country is to achieve its aim of starting accession talks with the European Union.

Prime Minister Kyriakos Mitsotakis is to meet with North Macedonia's Zoran Zaev and Bulgaria's Boyko Borisov on Thursday on the sidelines of the Thessaloniki Summit 2019, a business event organized by the Federation of Industries of Greece.

Mitsotakis' first meeting with Zaev was on September 24 in New York, on the sidelines of a United Nations meeting.

Prime Minister Kyriakos Mitsotakis is to meet with North Macedonia's Zoran Zaev on Thursday on the sidelines of the Thessaloniki Summit 2019, a business event organized by the Federation of Industries of Greece.

Foreign Minister Nikos Dendias on Friday reassured his North Macedonia counterpart Nikola Dimitrov of Greece's support for the Balkan country's prospects for joining the European Union while also underlining the need for the Prespes name deal to be honored to the letter.

Reconciliation, regional cooperation and maintaining good neighbourly relations are key factors for the European integration of the Western Balkans, Prime Minister Boyko Borissov said in his speech at the leaders meeting within the Strategic Dialogue for the Western Balkans, hosted by the World Economic Forum in Geneva, the government press office reported.

A member of Bosnia's state presidency said he would summon the French ambassador seeking an explanation, after French President Emmanuel Macron in an interview called Bosnia a "ticking time bomb" in the Balkans.

Greek Foreign Minister Nikos Dendias is traveling to Geneva to attend a Strategic Dialogue of Western Balkans leaders, an initiative organized by the World Economic Forum.

According to the Foreign Ministry, the aim of the talks will be to discuss regional cooperation and ways to enhance stability and economic progress in the region.

A veil of neo-conservativism is once again tending to cover Greece due to the heightened migration and refugee problem.

Marginal extreme-right and nationalist groups that were recently defeated feel as if they have found a new field of action and reconstruction all over Greece and especially in Macedonia, where their activity over the last years was not successful.

President Stevo Pendarovski will meet his counterpart Emmanuel Macron on the sidelines of next week's Paris Peace Forum in an attempt to convince the French President that North Macedonia deserves a start date for EU accession negotiations, it was announced on Tuesday. 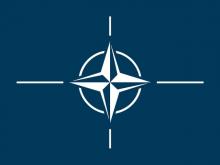 Ukraine will join NATO, Secretary General of the North Atlantic Alliance Jens Stoltenberg said in an interview on 1 + 1, BGNES reported..

Zoran Zaev, prime minister of North Macedonia, said in an interview that he feared a return to his ethnically divided country's "bad past", including a narrowly averted civil war in 2001. Edi Rama, prime minister of Albania, said in a separate interview that his country risked becoming "collateral damage" from the EU's divisions over enlargement, "Financial Times" reports.

A US envoy for the Western Balkans on Monday described European Union's decision not to open membership talks with North Macedonia and Albania as a "historic mistake" that sends a bad message to the region.

Deputy Assistant Secretary of State Matthew Palmer said the US will do all it can to persuade the EU to reverse the decision before a planned leaders' meeting in May in Croatia.