All News on Sports in Macedonia

The Interior Minsitry (MUP) announced this on Thursday, adding that it was ordered by the prosecution to identify the persons who took part in the incidents.

Among those injured in the fighting in Belgrade last night were several foreign nationals, the MUP said.

Unofficially, they came from Croatia, Greece, and Macedonia. 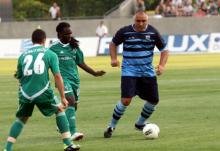 Prime Minister Boyko Borisov finded time after his meetings with the Deputy Prime Minister of Macedonia and the President of Switzerland to play a football game.

He missed a penalty in the winning match of his team, known as the "Bistritsa Tigers", against the veterans of Levski, reported the sports sites.

Macedonian football club Vardar eliminated Istanbul's Fenerbahçe from the Europa League late on Aug. 24 thanks to a 4-1 aggregate win.

Vardar defeated Fenerbahçe 2-1 in Istanbul in the second match of the Europa League qualifying round.

Vardar had also beaten Fenerbahce in the first leg in Macedonia 2-0.

The president's press service announced on Wednesday that the meeting will be held the next day at 11:00 hours CET, in the Presidency building in Belgrade.

Fenerbahçe failed to clinch its first league win of the season as it was held to a 2-2 draw at home by Trabzonspor on Aug. 20. 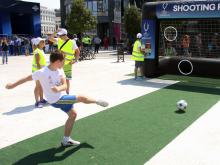 Football fever has gripped the Macedonian capital Skopje as thousands of fans from all around the world arrived for the spectacle that will pit Real Madrid against Manchester United on Tuesday evening at Skopje's Filip II Arena.

A new episode in the saga of the relations between Greece and the Former Yugoslav Republic of Macedonia (FYROM) takes place in the last few days.

Istanbul club Başakşehir was pitted against Spain's Sevilla in the Champions League playoff stage in a draw on Aug. 4.

Başakşehir, the runner-up in the Spor Toto Super League last season, will play the first game on Aug. 15 or 16 in Istanbul, while the return leg in Sevilla is scheduled for the following week. 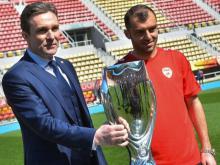 The Macedonian authorities are warning fans not to buy the UEFA Super Cup tickets offered on the internet as even a hefty price of over 1,000 euros does not guarantee that they will be allowed in to watch the final between Real Madrid and Manchester United on August 8.

Greece has accused the Former Yugoslav Republic of Macedonia (FYROM) of violating a 1995 agreement that normalized bilateral relations between the two states after officials of the Balkan country's women's under-17 national handball team showed up wearing "Macedonia" insignia on their jerseys for a match against their Greek counterparts in Skopje. 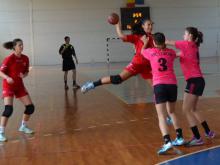 Ismail Morina, arrested in Croatia on Serbia's warrant over a scandal during a football game played in Belgrade in 2014, is seeking political asylum in Croatia.

Ismail Morina, arrested in Croatia on Serbia's warrant over a scandal during a football game played in Belgrade in 2014, is seeking political asylum in Croatia.

An international sports tournament for people with disabilities took place in Kyustendil.

The tournament is part of a year-long project run by the "START" association for people with disabilities from Poznan, Poland.