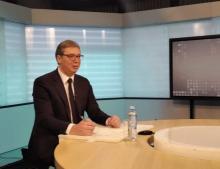 "I congratulate the citizens of Serbia on that, they deserve it. We did it in the best way," says Vucic. He points out that he is satisfied with the response of the citizens, as well as the organization, and especially with the comments that "the Germans did not do this either."

In the last 24 hours, 13.488 people were tested.
There are currently 4.379 patients in hospital.
Mass vaccination against coronavirus is being carried out in Serbia.

The European Court of Human Rights ruled in a decision published on Tuesday that Serbian citizen Aleksandar Zlicic was subjected to inhuman and degrading treatment at a police station in the city of Novi Sad after he and his friend were arrested in 2014 for allegedly possessing cannabis.

"I know that finances are very important in politics, but so is history. I am afraid that the previous administration gave more weight to finances than to history," Kurti said, adding that it was difficult in the debates with former US envoy Richard Grenell. 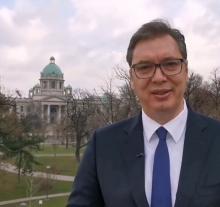 "I want to inform you that we received 10.000 new vaccines here in Belgrade this morning," Vucic said in a video post on his Instagram profile.
He stated that the fight for vaccines has been going on since early dawn, for every vaccine, for every citizen of our Serbia.

At the same time, every fifth person in our country does not have a high school diploma, Blic writes.
The fact that 2.68 percent of the population in Serbia is without schooling, 11 percent with incomplete primary education, and 20.76 percent with primary education, while almost two percent are illiterate (1.96) is also devastating.

Dozens of workers hired by China's state-controlled Zijin Mining Group Co. staged a rare show of dissent on January 14 when they protested in front of a copper mining complex in the Serbian town of Bor, majority-owned by Zijin since 2018.

Noting that the deal was signed on Aug. 16 last year, VisCoran's CEO, Özturk Oran, said the company did not think to announce it until they get the license.

Experts and citizens are voicing concern that the addresses of minority ethnic Albanians in Serbia are being made quietly inactive by the Serbian authorities, without the subjects being informed.

At all vaccination points, it will be possible to vaccinate only those citizens who have received a call from the electronic administration with the date of vaccination.

4.512 people were hospitalized.
The number of deaths from coronavirus since the outbreak of the epidemic in Serbia is 3.905. As of the end of this daily bulletin, 385.126 cases of coronavirus have been confirmed in Serbia. Mass immunization against coronavirus is being carried out in Serbia, and 256.521 people have been vaccinated so far.

Everything is ready for the reception of the first citizens, as shown by the photos from the place.

The presence of coronavirus was confirmed in December last year. After a few days of stabilized health, his clinical picture has worsened in the last three or four days, which is why he was resuscitated several times on Friday and Saturday.

The wheels of justice in Serbia sorely need speeding up. But when President Aleksandar Vucic told reporters last month that it would be "very important" to introduce artificial intelligence into the courts, not everyone was reassured.