All News on Economics in Serbia

BELGRADE - The foreign currency reserves of the National Bank of Serbia (NBS) totalled around EUR 10.3 billion at the end of February, which is by around EUR 300 million more than in late January, and this ensures M1 coverage of 311 percent and around seven months' worth of import of goods and services, NBS released on Wednesday.

BELGRADE -- The foreign currency reserves of the National Bank of Serbia (NBS) totalled around EUR 10.3 billion at the end of February.

This is some EUR 300 million more than in late January, and ensures M1 coverage of 311 percent and around seven months' worth of import of goods and services, the NBS said on Wednesday.

BELGRADE- A total of seven companies applied to manage public enterprise Zelezara Smederevo, but only six of them sent their official bids for a contract, Bojan Bojkovic, executive director of the only Serbian steelworks, said Saturday.

KOPAONIK - National Bank of Serbia (NBS) Governor Jorgovanka Tabakovic said on Tuesday that for the NBS, finance ministry and banks, this is the year to solve the issue of the high number of non-performing loans (NPLs).

BELGRADE - Serbia needs a new policy of industrialization to boost production and employment, and the upcoming Kopaonik Business Forum could offer solutions for this challenge, said Forum Chairman Dragan Djuricin.

BELGRADE - Serbia's Minister of Finance Dusan Vujovic said on Tuesday the fundamental goal of the new three-year arrangement with the IMF was to reduce the public debt share in GDP by 2017 and lower the budget deficit to around 3 percent of GDP.

BELGRADE - The increase of consumer prices in Serbia totalled 1.7 percent in 2014, which constitutes the lowest inflation rate in the past four decades, the analysis drafted by the Ministry of Trade shows.

BELGRADE - The Privatisation Agency will initiate on Tuesday the bankruptcy proceedings in 70 government companies that do not have any employees, head of the agency Ljubomir Subara has stated.

According to the action plan the Serbian government adopted on Saturday, 188 companies from the agency's list for privatisation will go bankrupt.

BELGRADE - The real year-on-year drop in Serbia's GDP in the fourth quarter of 2014 was 1.6 percent, the national statistical office has stated.

1.    How did the World Bank establish that this tender was transparent? Whose expertise provided the basis for the statement of Vesna Kostic, the World Bank's spokesperson? 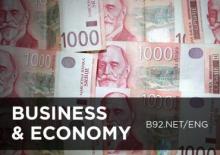 "Moderate rise in inflation ahead"

BELGRADE -- The inter-annual inflation will see a moderate increase after January this year, approaching the lower limit of the allowed deviation from the target.

188 companies to be declared bankrupt - minister

BELGRADE -- Of some 512 companies that are currently looking for new owners through the Privatization Agency, 188 will be declared bankrupt, Zeljko Sertic has said.

The Serbian economy minister also explained that procedures to sell about 90 companies have been abandoned.