BELGRADE - The Serbian and Slovenian armed forces are oriented towards enhancing cooperation, and contribute to strengthening of regional stability, the chiefs of staff of the two armed forces, Gen. Ljubisa Dikovic and Gen. Dobran Bozic, said in Belgrade on Wednesday.

BRUSSELS - A new round of talks between Belgrade and Pristina, facilitated by European foreign policy chief Catherine Ashton, commenced in Brussels Wednesday.

BELGRADE - An exhibition by cartoonist Aleksandar Zograf, titled Life in a Comic Book, will open late Wednesday at the French Institute in Belgrade.

The exhibition features Zograf's comic strips published in France in three collections: Second-Hand World (2008), Regards from Serbia (2000), E-mails from Pancevo (1999) and works published in albums from the Lapin series.

BELGRADE - The organizing committee for the marking of 150th anniversary of the death of the greatest Serbian philologist Vuk Stefanovic Karadzic (1864-2014) adopted on Tuesday the proposal for the jubilee celebration program.

BELGRADE - Air Serbia has signed a codeshare agreement with Adria Airways from Slovenia, which will enter into force on February 17 and give Air Serbia exclusive rights to flights between Belgrade and Ljubljana.

Air Serbia started having daily flights to Ljubljana on December 10, 2013.

BELGRADE - President of Zimbabwe Robert Mugabe has underlined that his country wants cooperation with Serbia. 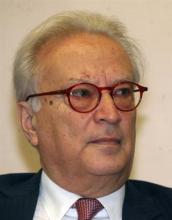 BELGRADE - The negotiations with the EU in the field of agriculture is a chance to revive Serbian agriculture, and domestic producers will be in position to apply for pre-accession funds in 2015, the Belgrade Chamber of Commerce (PKS) said Tuesday.

BELGRADE - Five percent of children in Serbia are not attending primary school and 15 percent of them have not been enrolled in high school, and this and many other problems in education are among the priorities of the National Education Council (NPS), participants at the 100th NPS Council Session said in Belgrade Tuesday.

Dodik informed Vukicevic about the stands of RS officials on the events in the Federation of BiH.

BRUSSELS - The dialogue between Belgrade and Pristina facilitated by European foreign policy chief Catherine Ashton will resume in Brussels on Wednesday.