All News on Economics in Turkey

Turkey's external assets stood at $297.4 billion by the end of August, up 16.4 percent from the end of 2020, according to Turkish Central Bank data released on Oct. 18.

Liabilities against non-residents fell 9.1 percent to $589.7 billion during the same period. 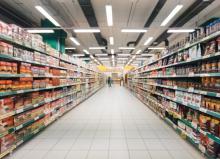 The overall rise beat even the upper range of economists' estimates from an Anadolu Agency survey.

The presidential decree regarding the appointment was published in the Official Gazette. There are four deputy governors at the country's Central Bank.

Stockpiling prompted by the pandemic, price hikes in raw materials, exchange rate volatility, increasing input costs, and speculative acts are among the reasons for food price inflation in Turkey, according to sectoral professionals.

The Turkish Statistical Institute (TÜİK) said the number of unemployed persons age 15 and over slipped 573,000 year-on-year to 3.97 million in the month.

The inflation rate in Turkey was recorded at 12.37 percent in February, the country's statistical authority announced on March 3.

Last month's figure was up 0.22 percentage points from 12.15 percent in January, the Turkish Statistical Institute (TÜİK) said in a statement.

Turkey's calendar-adjusted retail sales volume with constant prices fell by 3.8% year-on-year in March this year, the country's statistical authority reported on May 15.

Turkey launched on Nov. 20 its first behavioral economics project, “Nudge Turkey,” which aims to use psychology in the analysis of economic decision-making.

Turkey's annual inflation rate stood at 10.68 percent in August, revisiting double digits, with price hikes in cars, oil and LPG becoming the driving force, according to figures by the Turkish Statistical Institute (TÜİK) released on Sept. 5.

Turkey's Competition Board has opened a probe into claims that recent hikes in fresh fruit and vegetable prices were caused by unfair competitive moves by some companies, citing extreme price increases in some products that have a significant share in the budgets of low and middle incomers.

Turkish companies' foreign direct investment (FDI) outflow has increased by 10 times over the past 15 years, according to an index released on May 17.

Turkey's current account deficit shrunk to $3.1 billion in March, a $666 million fall compared to the same month last year, according to a Turkish Central Bank report released May 11.

The 12-month rolling deficit dropped to $33.02 billion in the third month of the year, down from $33.75 billion in February, according to the report.