All News on Social Issues in Turkey

Greece's Asylum Service will start receiving new asylum applications as of May 18, the Migration Ministry announced on Friday, after having stopped for two and a half months.

To maintain social distancing, half of the staff will work from home.

Greek authorities say two Afghan men have been jailed for six years and nine months each after being convicted of participating in riots this week at a migrant detention center near the border with Turkey where some 150 unaccompanied minors are being held.

Youth aged between 15 and 24 make up 15.6 percent of the 82 million people living in Turkey, the youngest country in Europe, the Turkish Statistical Institute (TÜİK) announced on May 15.
There are 12.95 million people aged 15-24 in the country, TÜİK said.
The ratio of young men to young women is 51.3 percent to 48.7 percent.

In what was viewed as another display of nationalistic rhetoric aimed at a domestic audience on Thursday, Turkey announced its intention to proceed with drilling activities in the Eastern Mediterranean, while a university rector and the head of an organization linked to the ruling AK Party set their sights on 12 Greek islands, Western Thrace and parts of Crete.

As Turkey on Wednesday conducted yet more violations of Greek airspace with a pair of F-16s entering the Athens Flight Information Region over the eastern Aegean islet of Farmakonisi, its Foreign Minister Mevlut Cavusoglu further raised tensions, insisting that his country's "open border" policy for anyone wishing to cross into Europe will continue.

Greece is dealing with "escalating Turkish violations" in the Aegean and eastern Mediterranean with "calm and determination," Foreign Minister Nikos Dendias said on Wednesday, adding that the "defense of [Greece's] sovereign rights is non-negotiable."

Migration Minister Notis Mitarakis has argued that his ministry needs "flexibility" in dealing with Greece's migrant crisis since neighbouring Turkey abandoned a 2016 deal with the European Union in late February and lifted restrictions on migrants and refugees from the Middle East, Asia and Africa trying to reach the bloc via its territory.

Police in northern Greece say migrants at a holding site near the country's border with Turkey have staged violent protests following weeks of delays in processing their asylum claims due to the Covid-19 pandemic.
Authorities said the protests also involved unaccompanied minors at the closed facility which currently houses some 250 asylum seekers. No injuries were reported.

The Foreign Affairs ministers of Greece, Cyprus, Egypt, France and the United Arab Emirates called on Turkey to «fully respect the sovereignty and sovereign rights of all states in their marine zones in the East Mediterranean,» during a teleconference on Monday.

During his Friday sermon marking the first day of Ramadan, Turkey's top Muslim cleric, Ali Erbas, declared that Islam condemns homosexuality because it "brings illness," insinuating that same sex relations are responsible for the COVID-19 pandemic.

The government faces a bumpy ride over the next few months. The prime minister and a small group of ministers and officials have handled two big crises - the deliberate migrant push at Greece's border with Turkey and the initial phase of the coronavirus - and these are successes no one can take away from the government, hard as they may try. 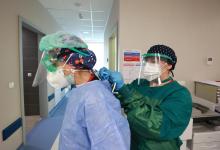 Healthcare worker moms marked Mother's Day on May 10 with a heavy heart as they isolated themselves from their children as part of measures against the novel coronavirus.

As millions of people stuck at home and avoid contacting their family members to curb the spread of the virus, health workers continue their devoted fight against the pandemic.

The aid was distributed by the Turkish Cooperation and Coordination Agency (TİKA) in cooperation with the Tunisian Union of Social Solidarity (UTSS).

Government spokesman Stelios Petsas on Friday evening rejected again a report by German magazine Der Spiegel which claimed that a Pakistani national had been shot dead, possibly by Greek soldiers, while attempting to cross from Turkey into Greece two months ago.

The report was originally published in March but on Friday the magazine published it in English.

Frontex expects a fresh wave of migrants seeking to cross the Turkish border into the European Union via Greece after Ankara lifts restrictions imposed to stop the spread of coronavirus, German newspaper Die Welt reported Friday citing an internal report of the bloc's border agency.