Turkey is an agricultural and animal production hub in the region and even for countries beyond, with its high production capacity and food security standards, according to university agriculturalist Orhan Özçatalbaş.

The recent spike in the number of daily confirmed COVID-19 cases in Turkey prompted Health Minister Fahrettin Koca to issue yet another warning to the public that the outbreak is far from over.

"The figures [from June 13] made us face the reality that the outbreak remains a serious matter," Koca said on Twitter on June 14.

In addition to contributing to the economy, Turkish street waste collectors help keep the environment clean and have played a role on the front lines during the COVID-19 outbreak.

Although they are not in the public eye as say health care personnel, who are viewed as heroes in the coronavirus fight, waste collectors continue to work under difficult conditions nearly "nonstop."

The Turkish Coast Guard on June 13 rescued 93 asylum seekers who were pushed back by Greek forces into Turkish territorial waters, according to security sources.

The asylum seekers of various nationalities initially set off for the Greek island of Lesbos (Midilli) from Ayvacık in Çanakkale, northwestern Turkey.

Beşiktaş suffered a shocking defeat to Fraport TAV Antalyaspor at Vodafone Park in their first Super Lig match after the league resumed play after halting activities due to the coronavirus.

The away team took a 2-0 lead in the first half on goals by Sinan Gümüş and Amilton.

The opening and closing ceremonies of the festival will be held in a real-time 3D virtual studio which offers the closest image to a photo reality.

So for the first time in the world, an international event will meet the audience with "augmented reality."

The aid will help the country combat the coronavirus pandemic.

The supplies were sent by Turkey's Health Ministry and Foreign Economic Relations Board (DEİK) upon the directives of President Recep Tayyip Erdoğan.

Turkey on June 12 said that it seeks to make its trade with China more sustainable and balanced by enabling high value-added exports.

A Turkish soldier succumbed to his wounds from a terrorist attack in Syria, the National Defense Ministry said in a statement on June 12.

He was injured in an attack on an ambulance on June 5 in the Idlib region.

The ministry expressed condolences to the martyr's family, the Turkish Armed Forces and the Turkish nation. 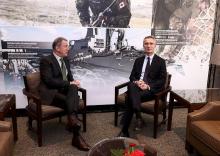 The Turkish defense minister and NATO secretary-general discussed Syria, Libya and regional issues in a phone call, the Turkish National Defense Ministry said in a statement on June 12.

Turkey's presidential spokesman İbrahim Kalın on June 12 said Ankara is in favor of a political solution in Libya.

Speaking to reporters after his official visit to Berlin, Kalın said Libyan warlord Khalifa Haftar violated the Berlin agreement like many others before it.

A top Turkish official on June 12 slammed Twitter's decision to suspend thousands of accounts from Turkey, calling it an attempt to smear the government.

Twitter announced overnight the suspension of over 7,000 accounts from Turkey.