Turkey would never be deterred from its production-, employment- and current account balance-oriented economic program, President Recep Tayyip Erdoğan has said on Nov. 26, addressing to citizens in the western province of İzmir.

Turkey, the United States, Brazil, Canada, and Saudi Arabia became the latest countries on Nov. 26 to restrict travel from southern Africa, where a new Covid strain labelled a "variant of concern" has been discovered in a potentially heavy blow to the world's efforts to end the coronavirus pandemic.

Turkey will pay compensation to a total of 370 people who are the victims or heirs of the 1960 coup.

A commission that was established to evaluate the applications to be made with the request of compensation for the damages of those who were harmed in the 1960 military coup has completed its works. 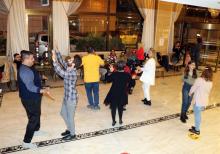 Thousands of Iranians have flocked to the eastern province of Van to benefit from discounts amid the Black Friday shopping days that started on Nov. 26 and will last until the weekend.

Causing a "Black Friday crowd" at the Kapıköy Customs Gate in the province's Saray district, many Iranians filled shopping centers and shops in the city.

Turkish Cypriots will be heading for early general elections on Jan. 23 to elect its 50 parliamentary deputies following the resignation of a shaky coalition last month and the election of a new leader of the ruling party.

The decision on holding early general elections was published in the country's Official Gazette after it was approved by the Turkish Cypriot Parliament. 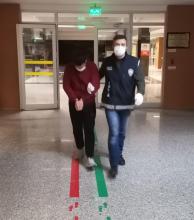 At least 34 irregular migrants have been apprehended during security checks and operations conducted in Turkish provinces, security sources said.

Turkish police teams in the northwestern province of Kocaeli's Gebze district were tipped off that a group of foreign nationals would be dispatched to the country's western provinces by a minibus.

Officials in the northwestern province of Edirne have planted saplings of "Edirne rose," a local rose species that got lost over time, that they brought from a Bulgarian village in its own habitat, reviving the species once again.

"Edirne rose has reunited with the lands it once was born in," said Recep Gürkan, the mayor of the province, during a ceremony on Nov. 25.

The director behind a biting look at India's entertainment industry says the backroom dealings and bold personalities of Bollywood have proven a rich target for satire.

Shaad Ali's latest venture is a local adaptation of a runaway hit Netflix series that follows four hapless French talent agents as they wrangle and coddle their celebrity clients.

It was the first bilateral ministerial-level meeting since the 17 December agreement was signed.

A Turkish court on Nov. 26 kept businessman Osman Kavala in jail who is accused of financing 2013 anti-government protests and playing a role in the 2016 coup attempt.

The next hearing is scheduled for January 17.

Turkey delivers the first phase residences and shops to the earthquake victims in the western province of İzmir, President Recep Tayyip Erdoğan said on Nov. 26.

"After the İzmir earthquake, we decided to build a total of 5,074 residences and 353 shops. We promised to start delivering them within a year," Erdoğan said, attending the earthquake housing delivery ceremony in İzmir.

The co-chairman of the Green Party, Cem Ozdemir, speaks at a regional party conference in Berlin, 30 September 2017. Photo: EPA-EFE/FELIPE TRUEBA

Ozdemir is a senior Green politician representing the party's reformist wing whose parents came to Germany from Turkey as "guest workers" in the 1960s.

As Turkey's daily COVID-19 cases have been rising steadily in the past few weeks and lingering around 25,000 over the last couple of days, Turkish authorities continue to call on citizens to comply with pandemic measures.

Health Minister Fahrettin Koca once again called on the people to comply "with the conditions of the fight" against the pandemic.

"We are not silenced, we do not fear and we do not obey," the women chanted together in the streets of Istanbul, Ankara, Izmir, Mersin and other cities and towns.

New production and business models that emphasize innovation and sustainability were discussed at the "Circular Economy: Don't Waste the Future" session on the second day of the Uludağ Economy Summit.