Productive small and mid-sized enterprises are nearly three times as likely to introduce some form of innovation than commercial firms, a study has found.

As government officials prepare for the fallout of a Russian embargo on food imports from the European Union, with talks scheduled to take place in Moscow on Monday between Greek diplomats and Russian food inspection officers, trucks loaded with fruit and other would-be exports have been returning to Greece.

The Hellenic Navy has contributed two gunboats and a frigate to the uphill effort by the coast guard to patrol Greeces sea border with Turkey and manage the waves of migrants fleeing the Middle East and North Africa.

Panagiota Roupa, the wife of Revolutionary Struggle leader Nikos Maziotis who was arrested last month in a shootout with police in central Athens, warned over the weekend that the guerrilla group would continue its armed action.

Two British brothers have been stabbed in a row over sunbeds at a five-star Turkish hotel, The Daily Mirror reported August 8.

Danny and Ben Slade feared they would die when the fellow holidaymaker attacked them with a knife in front of horrified sunbathers at the packed hotel pool near Bodrum, a popular resort in the southwestern Turkish province of MuÄla.

Bulgaria's traffic police imposed fines on more than 13,000 drivers in the first week of August only.

Officers have issued more than 2000 speeding tickets, and some 1500 drivers were sanctioned for not using seat belts or helmets, Nova TV informs.

A total of 450 people have been caught behind the wheel under the influence. Some 600 drivers did not have a valid driving license.

BELGRADE – Increased traffic at the border crossing at Batrovci between Serbia and Croatia has caused wait times of about two hours on the way out of Serbia and of up to 90 minutes while entering the country, the Serbian Interior Ministry (MUP) said in a release Saturday.

BELGRADE – Serbia’s Minister without Portfolio responsible for the EU Jadranka Joksimovic has said that it would not be a good message for Serbia if the process of the country’s accession negotiations with the European Union was slowed down over the political situation in Pristina.

Oil production from Iraqi Kurdistan Regional Government (KRG) remains unaffected despite an incursion by Islamic State of Iraq and the Levant (ISIL) militants along the autonomous region's border, its Ministry of Natural Resources said in a statement on August 9. 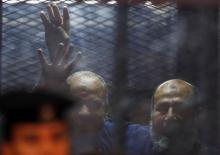 An Egyptian court on August 9 ordered the dissolution of the Freedom and Justice Party (FJP), the political wing of the already banned Muslim Brotherhood movement.

The decision comes after the authorities designated the Brotherhood a "terrorist organisation" in December following the ouster of Islamist president Mohamed Morsi by the military.

Bulgaria's Kozloduy NPP has published on its official website the shareholders' agreement signed with US Westinghouse Electric.

US President Barack Obama on August 9 vowed to continue air strikes against Iraqi jihadists if needed to protect US diplomats and military advisors.

Speaking in his weekly address, Obama said that he had authorized the strikes in Iraq to protect US personnel serving in the northern city of Arbil. "And, if necessary, thatâs what we will continue to do," he said.