Before the police were even dispatched to the site, protesters were manhandled by fellow passengers, after workers opened the doors of the docks to let them board the ferry

BELGRADE - Milovan Drecun, chair of the Serbian parliament's committee on Kosovo-Metohija (KiM), said on Tuesday that Kosovo's Interior Minister Bajram Redzepi is trying to ease the gravity of graffiti on the Serbian Orthodox monastery of Visoki Decani that call for the Islamic State and the establishment of the Caliphate.

BELGRADE - Serbia will do everything in its power to save as many companies as possible through the privatization process, and to achieve this, it will need the trade unions' help, Economy Minister Zeljko Sertic said Tuesday at a meeting with the representatives of the Alliance of Independent Unions of Serbia (SSSS).

Incumbent Prime Minister Victor Ponta, running for president, said that President Traian Basescu and candidate Klaus Iohannis have a joint strategy, trying to repeat the 2009 and 2012 feat of winning power by gambling.

An exhibition focusing on Turkey’s history as a refuge for those seeking shelter from conflict and oppression has been unveiled at the U.N. headquarters in New York. 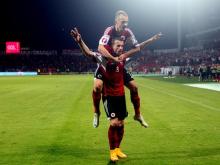 Albanian football fans will not be attending Tuesday evening's key qualifying match in Belgrade with Serbia for the Euro 2016 championship.

Israeli settlers in the occupied West Bank allegedly carried out an arson attack on a mosque near the city of Nablus early on Oct. 14, Palestinian security sources told AFP.

A United Nations medical worker infected with Ebola virus while working in Liberia has died in a hospital in Germany.

German medical authorities said on Tuesday the man - a doctor from Sudan whose name has not been released - died overnight in St. Georg hospital in the city ofLeipzigdespite "intensive medical procedures". 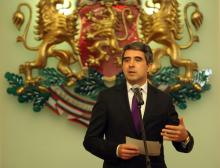 Bulgarian President Rosen Plevneliev has elaborated on his stance on Russia in an interview for Swiss daily Tages-Anzeiger.

BELGRADE - Officials of European countries' central banks met at the National Bank of Serbia (NBS) on Tuesday for a three-day forum on information and communication technology in central banks, the NBS has stated.

The meeting, the largest of its kind in Europe, was opened by NBS Vice-Governor Ana Gligorijevic and head of the IT Sector goran Kunjadic.