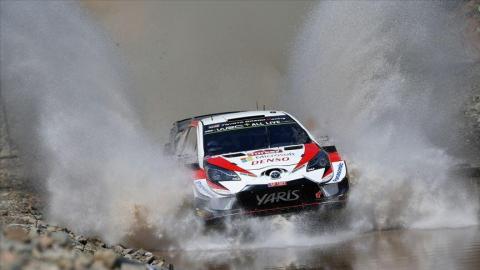 This 2020 world rally championship has despite all the obstacles presented by the pandemic produced a gripping title run with only 13 points dividing the top three drivers ahead of the Turkey Rally starting on Sept. 18.

Regarded as one of the toughest WRC venues in the calendar, the shortened third last leg of the championship is played out over 12 stages in less than 48 hours around the Mediterranean port city of Marmaris.

Sebastien Ogier is a familiar presence atop the drivers' standings as he tries to seal a seventh WRC crown.

But lurking just nine points behind is his Toyota Yaris teammate, Elfyn Evans, with defending champion Ott Tanak only four points behind the Welshman.

If Ogier can replicate his win in Turkey 12 months ago that could well give him a decisive advantage to take to Sardinia on October 8-11 and Belgium, the seventh and closing leg of a season originally scheduled to have 13 rallies, in November.

"To repeat last year's result this time is not going to be easy," he told WRC's official website.

"It's a tough rally for everybody, but for us opening the road will be especially challenging," explained the Frenchman, whose 2019 win came in a Citroen C3.

"We had some very good tests recently to prepare for the event, and I believe we have definitely made some improvements and some steps forward with the car," he added.

Evans, a newcomer to title run-in battles, is at least in public at any rate deflecting talk of emerging as champion.

Tanak meanwhile arrives in Turkey with the wheels firmly back on what had become a shaky defense of his crown.

His switch this season to Hyundai got off to a terrible start with his horrific crash in the season-opening Monte Carlo rally.