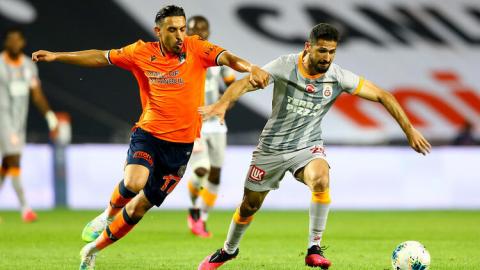 Defending champion Başakşehir will be hosting title hopeful Galatasaray in a Turkish Süper Lig game on Sept. 20 in an early-season test for both sides.

Başakşehir had lost its season opener against Hatayspor 2-0 in the first week, while Galatasaray enjoyed a 3-1 win over Gaziantep, before advancing to the Europa League third qualification round with a 3-1 win over Azerbaijan's Neftchi on Sept. 17.

Good news for Galatasaray in both victories was the performances of its strikers. Radamel Falcao was the hero in the league scoring double and having an assist, while Mbaye Diagne, who spent last season at Brugge on loan, scored twice against Neftchi.

Diagne, who was signed from Kasımpaşaspor in January 2019 for 13 million euros ($15.4 million), a significant amount for the financially troubled club, failed to perform before being loaned out, receiving the wrath of Galatasaray supporters.

His return to form, along with good performances from Falcao, whose yearly wage adds up to more than seven million euros ($8.3 million), including bonuses, will be crucial for the Istanbul club's league and European campaigns this season.

The Neftchi game, in which Christian Luyindama scored his side's third goal, saw two milestones for the club.

With the victory, Galatasaray has become the first Turkish club to record 100 wins in European competitions.

Also, it was Galatasaray coach Fatih Terim's 500th match of his career.

Galatasaray is still the only Turkish football team to have a major European trophy as it won the UEFA Cup in 2000 after beating Premier League club Arsenal on penalties in the final with coach Terim at the helm.

The Turkish Süper Lig club will take on Croatian team Hajduk Split in the third qualifying...