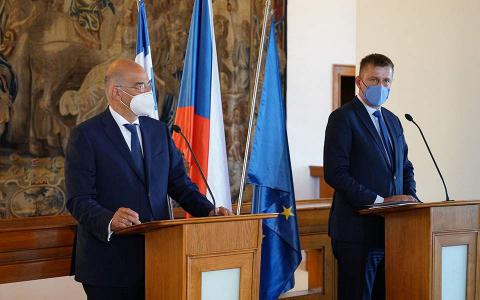 Foreign Minister Nikos Dendias on Friday appealed to his European counterparts for the creation of a list of potential sanctions to be imposed on Turkey if necessary.

Dendias made his comments during a joint press conference in Prague with his Czech counterpart Tomas Petricek.

"We don't want them to be imposed now on Turkey," Dendias said of the potential sanctions, " but to be there so it is clear what will happen if Ankara returns to the logic of illegal acts."

Dendias added that he and Petricek had asked for greater protection of the European Union's external borders following the migration crisis in Evros in March. "We all remember Turkey's effort then to weaponized the migration [issue] and to pressurize both the EU and Greece," he said, adding that, "we proved then that we can seriously and responsibly defend Europe's borders.

The situation in the...