Teams go door-to-door to check on people in isolation 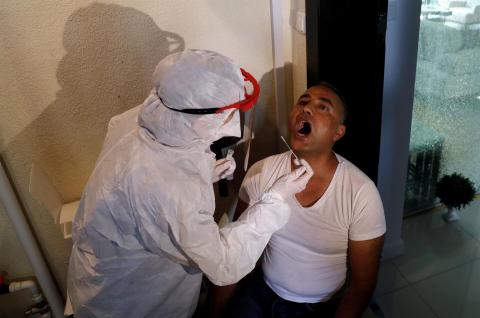 Teams have been set up to check on people who are in self-isolation due to COVID-19 to see if they are abiding by the rules and to meet their needs.

The neighborhood teams have been launched following a directive by the Interior Ministry after it emerged that some people were avoiding quarantine and self-isolation rules and venturing outside.

The teams communicate with the people in isolation through balconies or windows to inquire whether they are in need of anything.

The teams also fine up to 3,500 Turkish Lira (around $460) and take legal action against those who violate isolation rules.

"We pay home visits according to a list from the Health Ministry. Those lists are updated every two or three days as new people who tested positive are added to the list," said Ertuğ Kıyasoğlu, the head of such a team operating in Istanbul's Sancaktepe district.

The teams visit the same person not once but several times, he noted.

Turkey is also using the filiation method of screening the chain of contact of the infectious disease as part of the country's efforts to curb the virus.

"The filiation system implemented in Turkey is unprecedented in the world," Koca had told daily Hürriyet.

If Turkey had not this system in place, "we would have been wretched," he added.