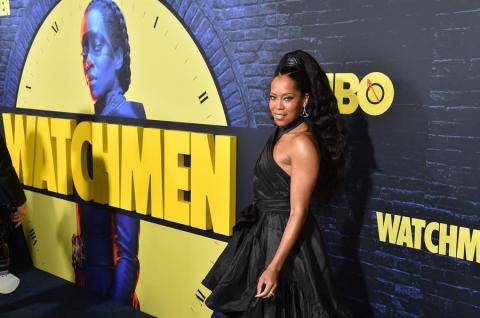 "Watchmen," a dark superhero series that tackles U.S. racism, triumphed at the Emmys on Sept. 20 as the stars beamed in live to an empty Los Angeles theater for Hollywood's first major Covid-era awards show.

With four victories in major categories, "Watchmen" ended up with a total of 11 Emmys - television's equivalent of the Oscars. Its creators dedicated their win for best limited series to African-American victims of the 1921 Tulsa massacre.
"The only way to put the fires out is to fight them together," said showrunner Damon Lindelof.

"History is mystery - it's broken into a million puzzle pieces. We know finding them will hurt. Sometimes we caused that hurt, maybe we even benefited from it," added Lindelof, who is white.

A timely blend of sociopathic superheroes and political satire based on a seminal 1980s graphic novel, "Watchmen" won rave reviews from critics and audiences alike.

The series, which debuted last year, depicts white supremacists, police brutality and rows over mask-wearing -- all subjects of intensely polarized national debate as the United States gears up for November's presidential election.
"Have a voting plan," said the show's star Regina King, a winner on Sunday.

Many viewers learned about the real-life, deadly destruction of "Black Wall Street" in Oklahoma for the first time through the HBO show's pilot.

"'Watchmen' was a story about trauma, and the lasting scars of white domestic terrorism, police corruption and brutality," said supporting actor winner Yahya...