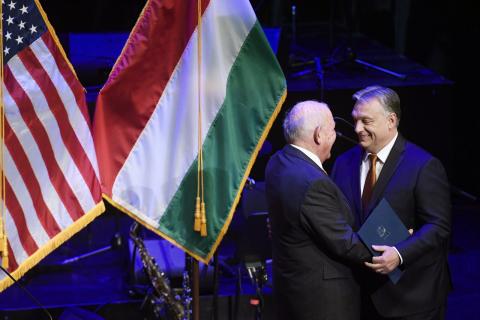 "I would urge Congress to make the private grantees RFE/RL, Radio Free Asia (RFA), and Middle East Broadcasting Networks (MBN) even more independent of the U.S. government. The politicization of their oversight agency, the U.S. Agency for Global Media, and the undermining of their corporate boards through the actions of the new CEO of the Agency will only serve to raise questions about their independence and their ability to continue to speak truth to power," Fly said in his testimony to the House Foreign Affairs Subcommittee on Europe, Eurasia, Energy, and the Environment on September 10.

The new CEO of the US Agency for Global Media (USAGM) - the independent body that oversees RFE/RL and the other US-funded media programs such as Voice of America (VOA) - is Michael Pack, a Donald Trump appointee, whose right-wing credentials include being a former president of the conservative Claremont Institute (Motto: Recovering the American Idea), as well as a close associate of Steve Bannon, Trump's former strategist, with whom he has made documentary films.

Pack's appointment to head up the USAGM was by no means straightforward. His nomination for the post was stalled in Congress for over two years as neither Democrats nor Republicans seemed particularly enthused by the candidate.

Then a White House attack on VOA in April in a statement under the headline, "Amid a pandemic, Voice of America spends your money to promote foreign propaganda", in which it accused the outlet of uncritically relaying Chinese propaganda about its efforts to contain the COVID-19 pandemic, seemed to galvanise Republicans and his confirmation sailed through the Senate largely along party lines on June 4.

Michael Pack is the new CEO of the U.S. Agency for Global Media after his...