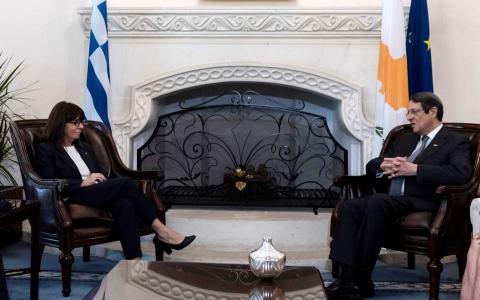 Greek President Katerina Sakellaropoulou underlined the unity and solidarity between Greece and Cyprus in the face of Turkish provocations during an official visit to Nicosia on Monday.

"The two countries maintain a common, solid diplomatic front," she said during talks with her Cyprus counterpart Nicos Anastasiades.

"Greece, like Cyprus, wants and looks forward to a constructive change in Turkey's stance. In compliance with the Charter of the United Nations, International Law and the Law of the Sea, as well as the Security Council resolutions on Cyprus," she added.